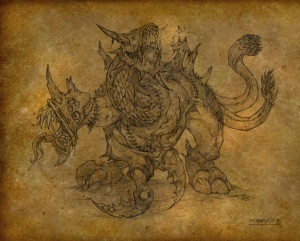 Chimaeron is a boss of Blackwing Descent raid instance. Its name is likely based on the real world usage of "Chimaera", and not the Warcraft creature.

Chimaeron was altered and remade by Nefarion, a gruesome nightmare twisted from its original form.

Stage One: Truly Something to Behold

Chimaeron attacks his current target with Break and Double Attack, while continually spraying Caustic Slime at the raid. He periodically casts Massacre on the raid, and his heads sometimes Feud following a Massacre.

At 20% health Chimaeron goes into a rage. This renders him immune to Taunt effects and greatly decreases healing done by players.

Simple in concept but more difficult in execution, Chimaeron is a gear check boss. There are three basic phases to the fight.

Chimaeron will wake up after a certain amount of time has passed from the activation of the Bile-o-Tron, although most groups will attack him before he wakes on his own.

When the Bile-o-Tron is online the raid will spread out. The buff will protect players from being one shot by Caustic Slime and Massacre. Healers need only heal people above 10,000 HP. Tanks will have to taunt off of each other after 2-3 stacks of Break.

When the Bile-o-Tron is knocked offline by Massacre, Chimaeron's heads will begin fighting each other but will still cast Caustic Slime. Thus the raid will stack up on top of eachother and will need to be healed as much as possible. AoE heals such as

At 20% HP Chimaeron will become untauntable, take extra damage and apply a debuff to the raid reducing healing done by 99%. At this point it's a "simple" burn. He won't cast Caustic Slime or Massacre anymore, and you will still have the Bile-o-Tron. Save all cooldowns for this phase. Everybody attacks the boss, healers included. Throw everything you have at him to bring him down.

Chimaeron regularly performs a Double Attack. This is designed to destroy any one-tank strategy. With enough stacks of Break the first attack knocks the tank below 10K health, and the second attack kills the tank. Avoidance can prevent this in some cases, but luck will eventually turn and kill the tank.

The above strategy causes the Break tank to build to 4 stacks of Break and thus take +100% damage for much of the fight. Another tactic that is suitable for better geared tanks is to swap tanks whenever there is a Break and the off-tank has lost his Break stacks. This prevents Break from stacking to 4, but requires the tanks to absorb some Double Attacks while under the effect of Break.

Every few massacres, the Bile-O-Tron gets knocked offline and Chimaeron stats casting "Feud". This is the timing of the events:

Leaping Leper Gnomes! You're a sight for sore eyes. I was worried the giant magma worm out front would deter visitors. Now that you're here you can give me a hand.

I suppose you'll be needing a key for this cage? Wait, don't tell me. The horrific gibbering monster behind me ate it, right?

What? Of course not! I could easily escape this simple contraption, but I'm much too busy. See, a while back I spent a few months inside the belly of a beast...

You were trapped, as I recall. This situation seems oddly similar.

It wasn't strictly voluntary, but I discovered something truly incredible. The beast seemed to be able to consume almost anything with no ill effects.

Gnomes in Lava Suits, for example.

Exactly. I ran some tests on the residual digestive fluid coating my suit and...

Say, you haven't seen my skinning knife anywhere, have you? I seem to have misplaced it.

Oh yes, the bile; it's amazing stuff. With the proper catalysts it renders anything to which it's applied practically immortal*. I've been harvesting it with my reprogrammed Bile-O-Tron 800 and I'm certain I've got the mixture right this time. I just need a few volunteers to test it out against a suitable creature. What do you say, friend?

Oops! That lever activates the Bile-O-Tron. Oh, and if you happen to come across a key...

Aggro
Lord Victor Nefarius yells: Ah, Chimaeron, truly a living testament to my scientific prowess. I reworked and twisted his form countless times over the years, and the final result is truly something to behold.

Mocking Shadows
Lord Victor Nefarius yells: This fight has gotten a bit stale; allow me to spice things up!

Death on normal difficulty
Lord Victor Nefarius yells: Impressive! You managed to destroy one of my most horrific creations - a task I'd thought impossible until now.

Outro
Finkle Einhorn yells: Great job guys! The key should be in his guts somewhere. Just, uh, fish around in there 'till you find it.

Using Bile-Etched Brass Key
Finkle Einhorn yells: Thanks for freeing me! I'm off to have more amazing adventures.

Unused quote
Lord Victor Nefarius: Oh, you were expecting something else to happen just then, weren't you? Let's see how well you adapt after a new set of adjustments, shall we?