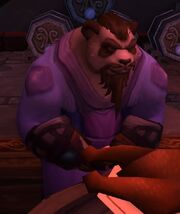 Chon Po Stormstout is a pandaren elder from the Wandering Isle and the brother of the famous Chen Stormstout. His wife Xiu Li drowned in a fishing accident long ago, leaving Chon Po to look after their children, Li Li and Shisai. He resents Chen for going on adventures and leaving his family, such as not even going to Chon Po's wedding. He disapproves of Li Li following in Chen's footsteps.

After Li Li destroyed the book Book of the Turtle, Chon Po's punishment was to write the lyrics of Song of Liu Lang thousand times. Once she escaped to the Forbidden Forest and was brought back by Strongbo, only to upset Chon Po. He ordered her to spent a week of training with Strongbo.[1]

Chon Po did not agree with Li Li's views that life was an adventure, and was very strict in keeping her away from letters written by his brother. After one incident in which Li Li fell asleep during a Spirit Festival musical in which she was meant to perform, she ran away from the Wandering Isle in search of Chen. Chon Po asked the martial arts master Strongbo, an old friend of his bother's, to find Li Li and bring her home.

When Li Li returned home at the end of her journey, Chon Po was much more happy than upset.[2]

During dinner with his children and brother, Chon Po got into an argument with Li Li about the events of Pearl of Pandaria. When Chen tried to tactfully end the argument, Chon Po stated that if Li Li had not run off, Bo would still be alive, upsetting her. As he and Chen spoke more, Chen realized that Chon Po didn't so much disapprove of Li Li, as he was transferring his frustration about Chen leaving years ago onto her.

When the long thought dead Wanyo suddenly reappeared, Chon Po was among the pandaren elders who spoke to him. Li Li then escaped once more and he sent Chen to bring her back. He was very saddened by his daughter's leaving but Mei tried to soothe him by reminding him of Xiu Li and telling him the last words Strongbo said to Li Li and Chen before he died.[3]

Chon Po and his son Shisai appear at Mandori Village after the monks of the Order of the Broken Temple relocate from the destroyed Peak of Serenity in Pandaria. Li Li, assisting the new Grand Master of the monks, visited her father and brother at the inn, telling them that she was going to Ramkahen in Uldum to search for the Fists of the Heavens. Chon Po told his daughter that he did not want her to run off alone, only letting her go when she said that the Grand Master would be coming with her.