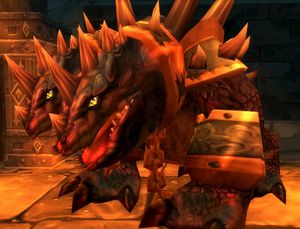 Chromaggus is a two-headed dragon beast in Nefarian's service, who resides in Blackwing Lair, coming after Flamegor and before Nefarian. He drops the Tier 2 shoulders for all classes.

Chromaggus is a boss in Blackwing Lair, right before Nefarian. One of the most challenging aspects to Chromaggus is the randomness of his abilities. As the name suggests (the word chromatic is derived from "khroma", the Greek word for "color", suggesting Chromaggus takes his powers from dragonflights from all colors), Chromaggus shimmers in a variety of colors, which relate to his current abilities. These abilities are determined upon instance creation, and will only be reset with the instance timer.

Despite his canine appearance, he's actually a dragonkin (more specifically a drakeadon). It is speculated that he was created by Nefarian experimenting on captured core hounds, such as The Beast found in Upper Blackrock Spire, possibly by feeding or injecting dragon blood from various dragons from all dragonflights.

Chromaggus is a "memory" in the fight against Argent Confessor Paletress in the Trial of the Champion encounter of the Crusaders' Coliseum.

Chromaggus is now tameable and is categorized as a beast. When tamed, he is considered a core hound. Taming him can be dangerous because of his breath attacks, so use extreme caution. Like other core hounds, he requires the 31 point

Chromaggus' breaths are unique in that they do not only affect the front of Chromaggus, but hit everything within LoS of Chromaggus. In each new instance, Chromaggus will use two of five possible breaths. This combination will stay with him for the remainder of the instance timer.

A breath is cast every 30 seconds, and the 2 breaths alternate.

Note: A rumor is circulating that Chromaggus' breaths can be predicted by examining the dragon carcasses in the Ebonroc and Flamegor's room. While believable, several days of attempts will prove this untrue as the carcasses randomly change colors if the instance is empty long enough, much like how the Death Talon pack and Blackwing Lair lab packs packs despawn if left partially cleared.

In addition to his two breaths, Chromaggus also radiates Brood Afflictions which debuff everyone in the zone, not just those in line of sight. They include:

It is extremely important that the raid is constantly cured of these debuffs as they not only hinder the players, but can result in a wipe if any player gets all five of the debuffs. This part of the fight is simplified by the Paladin's Cleanse; otherwise you will have to assign one or two of the various healer classes along with Mages and Warlocks' Felhunters to handle each type of debuff. Bronze affliction can only be removed with

[Hourglass Sand], which drops off the trash packs leading up to Chromaggus. (Mages can also activate

[Ice Block] to cancel it). Only healers, tanks, and hunters should need to remove bronze affliction. All other classes can live with it and must adapt to the frequent stuns.

When a player gets all five afflictions, they will turn into an elite Drakonoid. This mutation cannot be dispelled. The only way to deal with this situation is by polymorphing or killing the mutant player. When the player dies, Chromaggus is healed for a significant amount of health, prolonging the encounter. Attempting to chain polymorph the player may become complicated by the immense magical resistance that the player gains from the debuff. As such, it is best to keep these debuffs from ever stacking past 3. It also helps to keep a Restorative Potion handy in case the main dispellers are running low on mana. Mages can use iceblock to remove afflictions, however they cannot ice block out of the mutation.

Chromaggus frenzies every ten to fifteen seconds throughout the fight and must be kept tranquilized by hunters. The frequency of these frenzies is much greater than those of Magmadar but not quite as often as Flamegor. Nevertheless, frenzy must be kept off or the tank will die very quickly.

At 20% health, Chromaggus will enter a hard Enrage [1] that lasts the duration of the fight. He can still frenzy, which makes it even more important for hunters to stay on top of their tranquilizing shots. Additionally, healers who were taking time lapse breath should stop at this point and focus solely on keeping the tank up.

The Chromaggus fight is all about line of sight.

There are several possible positions where he can be tanked effectively:

Find somewhere that suits your raid and that you are happy with.

As described above, Chromaggus has different breaths. This fight is a long one, and the trick to it is to move OOS when CTRA gives a breath warning. All other than the MT should move OOS. Healing should intensify on the MT during this period as he will be taking heavy damage from whichever breath Chromaggus uses. The breaths are cast alternately so once you know which breaths he is using you can prepare appropriately.

During the fight Chromaggus will shimmer. This means his resistances have changed. He will become extremely vulnerable to one type of magic and extremely resistant to others allowing for a boost in DPS (or allowing DPS to slow for a time to allow tanks to keep ahead on aggro).

The one difference to this tactic is the Time Lapse breath. Commonly called 'hard mode' Chromaggus, Time Lapse is a breath attack that stuns. The stun is a binary spell which can be resisted with arcane resistance. Much like Onyxia when she does her fear attack, Chromaggus will target the person highest on his aggro list who is not stunned.

In order to deal with Time Lapse the tactic in theory is simple, but in practice is harder.

A warlock can leave an imp on the ideal tank spot so that it is easy for the off tank and MT to get the positioning perfect.

For all who can decurse, it is important to be on the ball due to the Brood Affliction debuffs as described above. Especially on the main tank.

It is vital that hunters keep tranquilizing shot up on this boss as he causes three times as much damage when frenzied. The blue and bronze afflictions can prevent hunters from tranquilizing. That's a recipe for a dead tank and a wipe, so priests and paladins must place the highest priority on removing the blue affliction from hunters, and the hunters should each carry two Restorative Potions and five Hourglass Sands per attempt.

As this is a very long fight, it's not a good idea risking death to stay in the line of fire of a breath attack until the last moment. Get into a safe spot early. The breath attack is instant. Once you see the breath animation start, it's over. So, it's safe to move back into line-of-sight as soon as that appears.

Chromaggus is similar to a core hound, and it is possible that they are related. The Beast is a huge core hound found in the nearby Upper Blackrock Spire, captured by the black dragonflight (probably stolen from the Molten Core). Most likely The Beast is included in Nefarian's experiments with the chromatic dragonflight, which Chromaggus may be a result from. Interestingly, as Core Hounds (at least the ones found in Molten Core) are the servants of Ragnaros and therefore the enemies of Nefarian and his dragons (see Blackrock Mountain), Chromaggus may be an attempt by the black dragonflight to gain their enemies' strength.