The chromatic dragonflight of Blackrock Spire was created by Nefarian's magical experiments, using the blood of dragons from the other dragonflights.[1] These experiments were largely considered failures; many whelps died before hatching, and those that survived were unstable, short-lived, volatile, and/or deformed.[2] Those that reached adulthood were artificially aged by Nefarian's twisted magics.[3]

The history of the chromatic dragonflight began ages ago with Deathwing, though no specimens were produced until recently, when Deathwing's son, Nefarian, achieved success with his magical experiments in his lair at the top of Blackrock Mountain. Nefarian captured whelps from the other four flights, and magically combined their traits to form the first chromatic dragons. His success was short-lived, however, as few survived long enough to hatch and fewer still proved viable once they did. While at least one proved hardy enough to survive being magically aged to adulthood, adventurers soon breached his inner sanctum with the aid of the red dragon Vaelastrasz, killed Nefarian, and destroyed the chromatic dragonflight.[4]

A few chromatic Drakeadons and Chromatic Prototypes can be found within Blackwing Descent. It is unknown if they survived the assault on Blackwing Lair or if Nefarian created them after his reanimation. One of the chromatic drakes is available as a mount for anyone who triumphs against Ultraxion in Dragon Soul.

Thrall: Twilight Of The Aspects

The chromatic dragonflight play a key part in Deathwing's plot to destroy the other Dragon Aspects. Under the direction of the mysterious Twilight Father, Twilight's Hammer cultists infiltrated the Chamber of Aspects and replaced all of the eggs at Wyrmrest Temple with chromatic eggs; these eggs were destroyed when Korialstrasz discovered the cultists, and sacrificed himself to ensure their destruction. In addition, a massive chromatic dragon named Chromatus was created. Chromatus had five heads, one representing each of the dragonflight, and was animated by the Twilight Father using the energies of the Eye of Eternity and the blood of Malygos's son, Arygos. Chromatus was eventually defeated by the combined might of all the Dragon Aspects with the assistance of Thrall, but his body proved indestructible by any known means and was locked in an arcane prison by Kalecgos and the Blue dragonflight.[5]

A single chromatic drake, Chromitus, was seen aiding the unexpectedly renewed black dragonflight during the Island Expeditions in gathering Azerite. 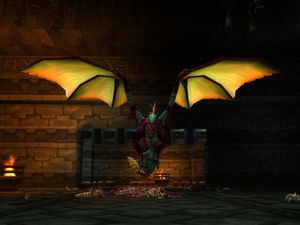 Posted by Caydiem on the official forums:

The breeding program began with Neltharion (Deathwing) many years in the past. While it's not yet proven what methods Nefarian uses for his Chromatic flight, it's worth noting that some of his creations hold weaknesses that their predecessors did not have, thus lending credence to the idea that he is using a different (seemingly inferior and/or untested) method from that of Deathwing.

Speculation from most lore enthusiasts suggest that the chromatic dragons are created wtih an egg of Neltharion or any dragonflight, much like the twilight dragons, and infused with a strong sense of magic, or in this case in Blackwing Lair before Chromaggus, the blood and/or energy of each dragonflight.

[Experiment 12-B] has a very low chance to drop from

Ultraxion in Dragon Soul on Normal and Heroic difficulty.

The breeding program began with Deathwing in ages past to replenish his own destroyed dragonflight. While Deathwing aimed to create chromatic dragons years ago (this desire constituted much of his motivation for attacking Grim Batol), he was never able to capture enough eggs to succeed.[6]

His son, Nefarian, has recently succeeded to an extent, creating dozens of these chromatic dragon whelps — young dragons with the properties of all five dragonflights. To crush Ragnaros, Nefarian had begun the efforts to bolster his forces against the Firelord and his army of golems, elementals, and dark iron dwarves for control over the Blackrock Mountain.[7] Nefarian currently breeds with the assistance of Rend Blackhand and the rest of the Dark Horde, who hope to use the dragons to overthrow Warchief Thrall and make the Horde back into the conquering, bloodthirsty force it once was.[8]