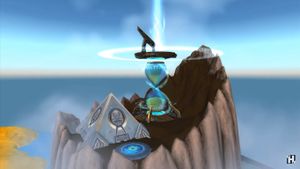 The Chronal Spire was a planned area during Warlords of Draenor. It was to be found in the middle of the continent, in the Tanaan Jungle zone.

Earlier concept arts indicate that the original gateway to Draenor was supposed to be the Chronal Spire instead of the Dark Portal. This idea was ultimately replaced by the Iron Horde creating their own Dark Portal and connecting it with Azeroth's one, replacing the link to Draenor-Prime's remnants, Outland. The spire's location was replaced by Zangarra.

For a time the bronze dragon dragon Chronalis appeared behind Khadgar's Tower in Zangarra, on the border of Tanaan Jungle. He was apparently a leftover of the Warlords of Draenor alpha builds given to his obscure location, no interaction and revamp of the area. He was presumably intended to appear at the Chronal Spire.