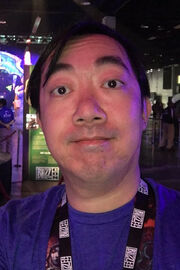 Chung Ng, also known as Rygarius, is a former Blizzard employee and Community Manager for the US World of Warcraft forums.

After more than 10 years with the company, on July 20, 2016, Rygarius announced that he would be leaving Blizzard at the end of the week.[1] He described the World of Warcraft community as "the finest most passionate community I've ever served."[2]

Rygarius is part of the Community Team that won "Best Community Management team" at Dragon*Con 2012.[3]