The Cinder Kitten combines the cuteness of a newborn cat with the searing magma of the Elemental Plane of Fire. Gift one to each of your guildmates and turn every raid night into an incendiary itty bitty kitty committee. 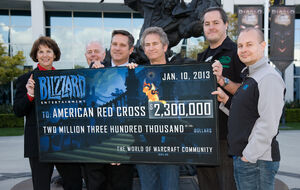 This Cinder Kitten will char your face off with cuteness.

If you can’t stand the heat, stop petting it – Combining the cuteness of a newborn cat with the searing magma of the Elemental Plane of Fire, the Cinder Kitten arrives on scene as the year’s hottest companion pet. Get each of your guildmates to get one of their own, and turn every raid night into a fiery feline frenzy.

Players are mailed this pet by Breanni:

Somehow I ended up with an entire litter of these playful, purring pyromaniacs.

I'm afraid if I can't find them all homes, my whole shop's gonna go up in smoke!

Thank for helping out, but remember: Don't pet these kittens without fireproof mittens!