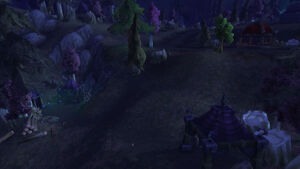 Cinderfall Grove when controlled by the Alliance

Cinderfall Grove is a base located north of Bashal'Aran in Darkshore. It is contested during the Battle for Darkshore.

When the Horde controls Darkshore, the grove's trees are being cut down while Forsaken and goblin soldiers patrol it and the Certified Explosives Expert is throwing bombs on the road.

When the Alliance controls Darkshore, night elf forces control the camps while worgen are defusing the ordnance left here by the Horde.