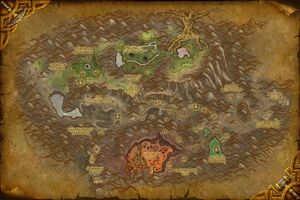 Slay Cindermaul and locate the Tome of Openings.

Twilight's Hammer is using these corridors, and others like them, to move supplies from the elemental planes up into Azeroth. In order to seal these passages off, we're going to need to know how they're constructed.

Find for me the Tome of Openings, used by the elementals to open gates between the planes.

Cindermaul the Portal Master should have one. You'll have to kill him. Careful! He's probably got some tricks up his sleeve...

("Cindermaul, the Portal Master: Be careful: Cindermaul will almost certainly call forth reinforcements from the other elemental planes.")

The tome! Have you found it?

This is the tome we've heard about?

<Jordan hefts the stone slab into his arms and looks it over.>

I see... I guess it's good that I can read some of the elemental script. I'll work on translating this. Meanwhile, there's one final problem to take care of.

Head back in to the tunnel to the east. Across from the Twilight Anvil is a small room with three portals guarded by Cindermaul, a level 81 elemental with 74,374 health, at [30.8, 41.7]

. True to Jordan's word, this is a multi-phase fight: On aggro:

Cindermaul says: We burns it, we burns! Bring fire, yes!
Cindermaul calls forth creatures from elsewhere in the Firelands.
Cindermaul casts Earthsmash, stunning all foes within the area for five seconds as three Firelands Denizens spawn out of the right-most portal.

Cindermaul says: Come winds, whisper whisper... Blows it, blows it, blows it away!
Cindermaul calls forth creatures from Skywall.
Another Earthsmash stun as three Skywall Denizens appear out of the left-most portal.

We ... crushes it! Must ... make crush. Hurry friends!
Cindermaul calls forth creatures from the heart of Deepholm.
The final Earthsmash stun as three Deepholm Denizens come out of the center portal.

Cindermaul says: It mustn't know... it mustn't learn... what's ours...
Cindermaul drops the Battered Stone Chest, which contains the Tome of Openings. Any denizens from the other elemental planes despawn at the same time.

Loot the chest then head back.

Foray into the Firelands