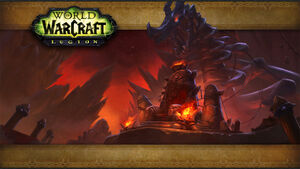 The Circle of Blood Arena, also called Blade's Edge Arena, is an arena located in Blade's Edge Mountains, north of Thunderlord Stronghold. It was, along with the Ring of Trials arena, added in The Burning Crusade and thus among the first arenas added to the game. Unlike most arenas, Circle of Blood can be accessed in the outdoor world in addition to its instanced version, serving as a PvA arena. The arena is ogre-styled.

The arena received an update in patch 7.1.5, improving its visuals while retaining the layout. In the updated version, High King Maulgar sits atop a throne overseeing the arena. He will taunt players with special voice lines, encouraging them to kill each other. 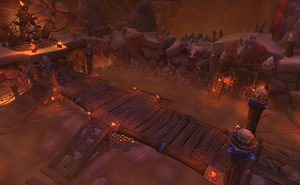 This arena is rectangular shaped. The starting areas for both sides are on opposite corners. A bridge spans the middle of the arena with ramps on both ends. Under the bridge is a pit and 2 pillars. Deceased players may watch the fight from the pit. In addition, there are two platforms on each side of the bridge which may be reached by jumping or running across the ropes leading from the bridge to them.

[Shadow Sight] power ups would appear on the platfroms that let the user see stealthed and invisible characters; however, it also increases the damage taken by 5%.