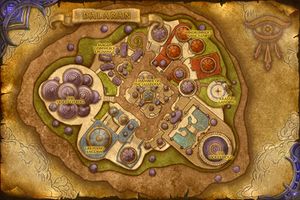 Meet Khadgar at the Chamber of the Guardian in Dalaran.

<Khadgar's voice erupts from the elemental once again.>

Obtaining information on the Pillars of Creation before the Legion could stop us was a considerable victory. It won't bring back those we lost on the Broken Shore, but I believe it will help us avenge them.

Dalaran has become a focal point of the Legion's assault. Your presence here is crucial. If the demons are putting this much effort into attacking the city, it means Dalaran will play a pivotal role in the struggle to save Azeroth.

I shored up Karazhan's defenses as best I could, but I have little confidence they'll hold. We have other matters to focus on in any case.

Gul'dan has set his demon dogs loose upon Dalaran. He wants this city gone... but we're not going to let him have his way.

I believe Dalaran will become the focal point of our campaign against the Legion, neutral ground where the heroes of every kingdom can join together against our mutual foe.

[100] Hiding in the Stacks, Khadgar's Upgraded Servant appears near you and offers this quest, wherever you are in the world.

If you're not already in Dalaran over Karazhan, take the portal there in Stormwind Keep or the Cleft of Shadow, depending on your faction, as before. A demonic invasion force is attacking the city. Feel free to ignore them and head to the new center of Dalaran, the Chamber of the Guardian.

On approach
Archmage Khadgar says: I'm relieved we both made it out of Karazhan in one piece.