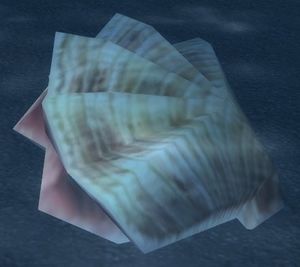 A clam is a creature, which acts like a container item that can usually be fished from the sea and are often dropped by coastal mobs. They usually contain clam meat which can be used for Cooking and rarely a Pearl which can be used in several profession recipes. Giant clams can be found on the sea floor and opened for their items.

These clams can be collected in your inventory, and generally stack up to 20 clams per slot. Unlike other objects that can be opened, opening a clam counts as an action and might interrupt certain channeling abilities. Clams that contain pearls will also provide clam meat. If there is insufficient inventory space for the contents of the clam (both the meat and the pearl, if there is one), the clam will simply remain in your inventory and the opening will "fail." Note that the contents of the clam are determined when successfully opening it. This unusual system is a result of a patch changing clams from regular containers, which could be opened and looted as normal, but could not stack with each-other, generally making looting a clam an annoying hassle.

Example: You have 0 empty inventory spaces. One stack in your bag contains clams, another stack has less than 20 of the type of clam meat typically found in those clams. If you continue to open clams you are likely to encounter a clam that fails to open despite the stack of clam meat being less than 20; this indicates the clam would have produced a pearl. Attempting to open the same clam again, even with cleared out inventory space is likely to simply produce clam meat and not the pearl it otherwise would have. Thus it is important to have free inventory slots when opening clams if you plan to sell any pearls that happen to drop.

You cannot "guarantee" pearls by filling your inventory slots and leaving stacks of pearls of less than 20 in your bag without stacks of clam meat of less than 20. Doing so will produce a failed opening attempt every time because even when a pearl would drop, there would be insufficient room for the clam meat.