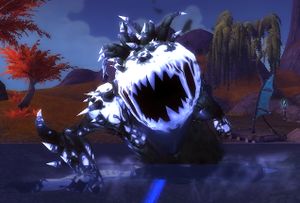 Point out Pools of Corruption in Inkgill Mere to Waterspeaker Gorai to let him know you are ready to defend him while he completes the cleansing ritual.

Pools of the same murky substance that came out of Mei emerged in the lake recently.

I will travel into the Mere with you. Point out the pools of corruption that you are ready for me to cleanse.

You will need to deal with whatever comes out and protect me as I complete the ritual.

Waterspeaker Gorai says: Point out the pools of corruption, and I will use my staff to cleanse them. You'll need to defeat the creatures that emerge!

Is the lake cleansed?

The Mere... I can feel the corruption clearing. At least now, this corruption will not spread.

But, there is one more thing we must do.

Head out on the lake and interact with Pools of Corruption.

Waterspeaker Gorai says: I will begin the ritual. Prepare yourself!

A Boiling Rage, a level 87 sha with 214,000 health, appears. Kill it and move on to the next pool. As Gorai is following the player around, turn in the instant it completes.