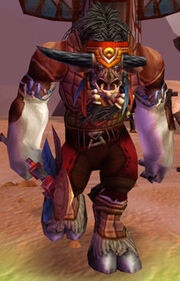 Cliffwatcher Longhorn is a tauren located in Freewind Post in Thousand Needles. His brother is Nataka Longhorn.

Cliffwatcher Longhorn was originally a level 55 Horde quest giver. Judging by his name, nonstandard headgear and armor, and quests, he appeared to be the brave in charge of Freewind.

When the Grimtotem attacked Freewind Post after the cataclysm, those residing in Freewind were caught by surprise due to the efforts of Longhorn. It is revealed that Longhorn also took part in the attack by killing Montarr and Innkeeper Abeqwa. He later reveals when the players fight him that he was always with the Grimtotem Clan and acted as their spy.

After his death, the adventurer is rewarded with presumably his right horn (as half of his left is already broken off), in which his spirit is apparently enslaved to or trapped inside and is made fight for him.

It is unknown if his brother became aware of his treachery.

He may be related to Masha Longhorn.