Like Goblin Sappers, you cannot carry Clockwerk Goblins in a transport. Otherwise you would load up transports with them and blow up entire towns and that wouldn't be any fun for the person being blown up, but what do you care because you'd be having fun blowing people up! Anyway...it's not allowed...[1]

Explodes the Clockwerk Goblin, dealing damage in an area.
Damage is affected by armor values such as 5.
Although it appears to do spell damage, (70% damage to Heroes), it will still damage spell immune units. 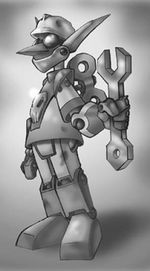 Clockwerk goblins are poorly-made soldiers that explode after a set period of time. It is obviously of inferior workmanship: It bounces up and down, the sounds of rusty gears echo from within, and steam shoots from crevices. A large key turns in its back, making it look like a giant wind-up toy with a red hat and goggles. It swings a spear with its left hand.

They are some of the first creations an intermediate goblin tinker makes when he experiments with self-ambulatory devices. They are useful as an exercise, but not so much as real soldiers — the design’s original specifications seem in error, for after a short period of time, the goblin shuts down. Rather than redrafting the blueprints, some enterprising goblin in the past made just a few adjustments, so that rather than shut down the clockwerk goblin explodes, making it sort of a mobile bomb.