Clockwork Rocket Bot was originally obtained from opening a

[Winter Veil Gift] during the Feast of Winter Veil. It can now rarely be found inside a 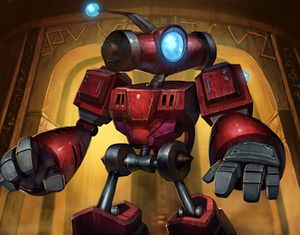 This mechanical warrior is a favorite gift during Winter Veil. Batteries not included, but rockets definitely are!

Initially, this pet could be buffed, "healed", and otherwise have beneficial spells cast on it like a party member. Power Word: Shield in particular could be cast on the robot, allowing it to survive several simultaneous attacks before falling over. This was hotfixed shortly thereafter.