This article is about the Shadowlands race. For the blue drakonid, see Varos Cloudstrider. 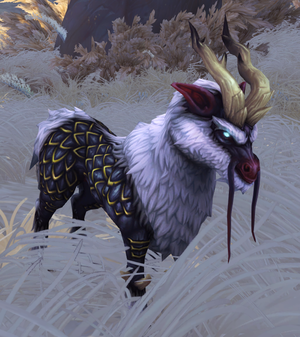 Cloudstriders (AKA lighthoofs[1] or kirin)[2][3] are antlered, goat-like beasts found in Bastion.[4]

A type of airborne kirin (or kirin-like creature) called the swift windsteed is said to be one of the rarest and most majestic beasts in Pandaria on Azeroth.[5]

[Swift Windsteed] was formerly available for purchase from the Blizzard Shop.