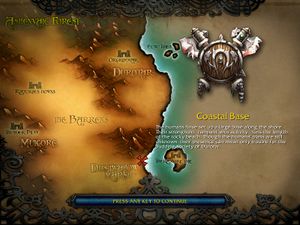 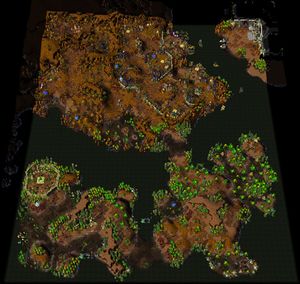 "Coastal Base" is the only name given to the large Kul Tiras settlement previously located on a shore in Dustwallow Marsh during the events of the Founding of Durotar. It was occupied by the Human Settlers and their armada.

Besides civilian houses and farms, the settlement contained numerous military buildings and was guarded by veteran Kul Tiras soldiers under the command of the paladin Dagren the Orcslayer. The blademaster Samuro used explosives on these structures to cause enough chaos to allow Rexxar and his companions to set sail unhindered to Theramore Isle.

The settlement was afterwards overrun and destroyed by naga, and the only prisoners taken were found mortally wounded by Jaina Proudmoore and Rexxar.[1]

The humans have set up a large base along the shore. Their stronghold--rampant with activity--runs the length of the rocky beach. Though the humans' plans are still unknown, their presence can mean only trouble for the budding society of Durotar.