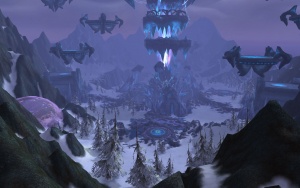 Coldarra is a large island off the west coast of the Borean Tundra, home to the blue dragonflight and their crazed leader, Malygos the Spellweaver. It houses the Nexus and various instances.

Coldarra is only accessible via flying mount or via the flight point from Amber Ledge to Beryl Point. This flight point becomes accessible only after completing the quest

Coldarra is the most isolated part and the only inhabited island in Northrend. The only access point is a bridge called the Frostbridge that runs across the Westrift, and to get across it you have to gain the permission of the blue dragons guarding it. No one sets foot on Coldarra unannounced or uninvited. The nearest region to the island is the Borean Tundra located to the east across the Westrift.[1]

Coldarra is an irresistible lure for arcanists. Malygos, the leader of the blue dragonflight, is unquestionably the most powerful arcane spellcaster in all Azeroth, and designed not only most spells but the theories behind them. His libraries could make any mage powerful beyond their dreams, and even a few words with the ancient blue dragon could grant power and wisdom most mortals never achieve.[2]

Coldarra is a suiting name for this island as it is entirely made of ice, with great jagged peaks that rise from the cold ocean like pale blue fangs. Some of those peaks rise high enough that you can see all the way to Crystalsong Forest and even to the Dragonblight or Icecrown Citadel. Although it seems a harsh place, dragons live here. Probably the cold doesn't bother them as they are the only inhabitants in the island, with the exception of the occasional sheep or mountain goat. Rumors say that visitors sometimes stay to study with Malygos or record his tales, but no one settles permanently as the dragons don't allow it. This also means Coldarra has no Scourge presence whatsoever. Even the Lich King probably knows better than to invade this place as he wouldn't gain much by trying, plus he might anger the dragons into retaliating. So the Scourge stays on the mainland and the dragons live in peace with their thoughts and their magic and their icy cliffs.[1]

The blue dragons say Malygos, the oldest and greatest of their kind, created the spells that set the sky and the earth into motion. Harnessing the world's magic and developing these spells took millennia. He settled in some icy cliffs during that time, a place that would be later known as Coldarra. Other blue dragons joined him, though many lived elsewhere in the north. Then the black dragon Deathwing attacked the blue dragons, slaughtering them by the dozens. The survivors fought back but were no match for Deathwing's ferocity. In the process, their homes were destroyed and the land so damaged it could never recover. That area became the Dragonblight and Malygos, in his rage and grief, split his home from the rest of the land, creating the gap later named the Westrift.

The remainder of the blue dragon race settled on Malygos's island, which they named Coldarra, and carved out homes of their own. They gave up the war against Deathwing and the black dragonflight and chose to withdraw from the world. Soon they lost themselves in study, though they always look toward the Dragonblight and the spirits of their kin still lingering there.[2]

There is an old tuskarr legend that says at some point a few centuries back, a human came to Coldarra to see Malygos. This man was a scholar and wished to exchange ideas. The great dragon chose to see him, and had the man flown to the Nexus. For months they communed and formed a great friendship, but then the man returned to the world and his duties. He came back several times, however, and finally Malygos ordered a bridge fashioned across the Westrift so his friend could approach unaided.[2] 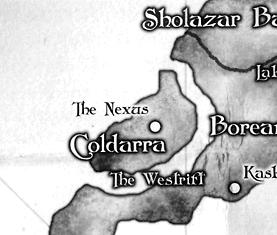 Map of Coldarra in Lands of Mystery.

Coldarra is a large island and it is roughly a third as long as the mainland, though only as wide as the tip of the Borean Tundra or the Howling Fjord. Coldarra has no beaches and no gentle shore — its edges rear up as cliffs from the surrounding water. Most of the island is rock covered by thick ice, though here and there enough dirt has gathered to produce tough grass or small bushes. The dragons themselves live in caves fashioned from the cliffs and mountains, or in handsome stone buildings carved into the peaks. The island has no roads or bridges, save the Frostbridge that links to the mainland. Dragons fly everywhere, and carry guests from place to place. An experienced climber could scale the peaks, though, if he had their permission or somehow evaded their notice.

Coldarra has only one real settlement, the Nexus, an extensive series of caves and tunnels that riddle the region and home to the blue dragonflight. Since blue dragons are solitary creatures, they prefer to live alone and meet only for discussion, flight or mating. The solely exception to the dragons' solitary existence is the Nexus, which is also Malygos's home and the dragons' center of knowledge.[1]

A cure for the Scourge?

An ancient scroll found in a Northrend ruin mentions a spell that can remove undeath from a huge number of creatures at the same time, laying the undead creatures permanently to rest. Such a spell could rid the world of the Scourge for good and strip the Lich King of his power. The scroll has no details, but if such a spell does exist the blue dragons of Coldarra may know about it, and possibly even have it. All that would remain would be to gain access to the island and ask them — or, barring that, sneak onto the island unnoticed, then sneak into the Nexus and search for the spell without getting caught.[2]

Coldarra is a portmanteau of "cold" and "caldera" suggesting that maybe long ago, before the Great Sundering and Northrend formed into an arctic tundra, it was the site of a large volcanic crater. Or perhaps it was simply a volcano that erupted during the Sundering and formed into a caldera. It is unclear whether the volcano itself is dormant, but given extreme damage sustained by the Sundering, the molten cavity could have collapsed there by rendering Coldarra completely lifeless.