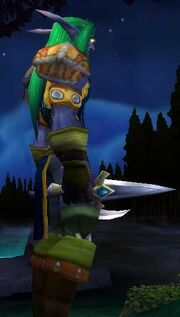 Coldrage Dagger is a rare BoP dagger. It has a chance on hit to slow the target, much like [Enchant Weapon - Icy Chill] enchant.

The origin of these powerful daggers is not known, though some scholars believe they may have extra-dimensional origins. At least three are known to exist in Kalimdor, although ancient tales suggest at least one other surfaced in Lordaeron. A coldrage dagger appears to have a blade made entirely of ice, although it is not cold to the touch and does not melt in hot conditions. Snowflakes appear and disappear in a swirling cloud about the blade when it is used in combat. The wielder's skin takes on a bluish hue, as if he were suffering from frostbite, although he incurs no ill effects from this condition.[1]