Not to be confused with Colin (human) or Col'in. 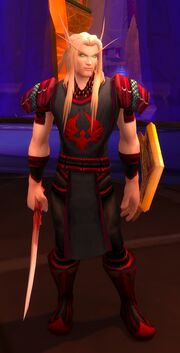 Colin is a blood elf. He first appeared as Initiate Colin in Silvermoon City and later Archivist Colin in the Sanctum of Light.

He is a Blood Knight holding the rank of initiate, located alongside Initiate Emeline in the Blood Knight headquarters, the Hall of Blood. He and Emeline engaged in various conversations, alluding to an animosity with the neighboring Farstriders, the betrayal of Kael'thas Sunstrider, and Lady Liadrin securing a new source of power for the order.

During the Burning Legion's third invasion, he became archivist of the Silver Hand and is located at the Sanctum of Light.

Their lines mix and match so the conversation is different from time to time. Therefore, the order might not be the same as below, but the line will be the same.

About Kael'thas Sunstrider steal M'uru away
Initiate Emeline says: Matters are so uncertain now that the chamber below is empty...
Initiate Colin says: Is... it true, what I've heard? That it was the Sun King himself?
Initiate Emeline says: It's gone. I can't believe it's gone. Who would have thought we'd be betrayed like this?
Initiate Colin says: Lady Liadrin is bound to find a way. She must.

About Farstriders attitude against Blood Knight

Initiate Colin says: I know what you mean... They whisper about us when they think we can't hear them. They'll get theirs.
Initiate Emeline says: Still, the Blood Knights will endure through this loss. We have no other choice... We must find another source.

Initiate Colin says: Jealous, that's what they are. They're afraid to dedicate themselves to true power.

Initiate Colin says: They simply fear what they cannot begin to understand.

Initiate Colin says: Who do they think they are?