This article is about the extinct colossals of Draenor. For the crystalline mountain giants, see colossus. For other uses, see earth giant (disambiguation). 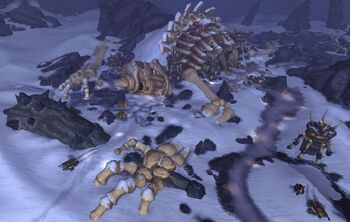 Grom'gar, built in the corpse of the rumored last colossal.

Colossals[1][2] or colossi,[3][4][5] sometimes referred to as earth giants,[6] were an immense species of giant that once lived on Draenor before being driven extinct. They were enormously large, could possess either one or two eyes and were the ones who first shaped Draenor.[1] The colossals were the ancestors of the magnaron[1] and the gronn,[6] and by extension the ogron, ogre lords, ogres[1] and orcs.[6]

The only signs of their passing were the Temples of the Damned built during the Second War. Several massive colossal skeletons can be found across the alternate Draenor, but it seems these remains were destroyed along with the rest of Draenor in the main universe.

The colossals are literal pieces of Grond, the great giant created by the titan Aggramar to combat the Evergrowth. As Grond fought the Sporemounds, pieces of his body fell off and came to life as the colossals due to the life essence that stirred within. Even though Grond was killed by Botaan, the final Sporemound, hope swelled within Aggramar at the sight of the colossals. They were not as mighty as Grond, but they were many and their shadows still loomed over the land. Aggramar crafted great discs inscribed with titan runes from the body of Grond and fused them to the colossals, creating armor that granted them strength and resilience. In the meantime, the Evergrowth had begun to retake lands Grond had taken from it. As Aggramar unleashed the colossals against Botaan and the genesaur - creatures that were pieces of the Sporemounds just as colossals were pieces of Grond - he felt a constellar dying somewhere in the Great Dark Beyond and left to investigate with the promise he would return one day. He never did.[7]

The colossals would never know of Aggramar's fate at the hands of Sargeras and fully expected their master to return. They were determined to bring balance to Draenor before that happened, but it was an enormous task for the Evergrowth had enveloped much of the world and Botaan now eclipsed Grond in size. It would have to be drawn away from the Evergrowth if the colossals had any chance of succeeding, and so they drew its ire by hacking way at the forests at the Evergrowth's edge. Botaan rallied the genesaur and they stormed toward the colossals, which retreated into barren ravines and hills that would give them the advantage. Botaan followed them as it saw the colossals as only pale imitations of Grond, and when it left the borders of the Evergrowth the colossals attacked with their full might. The ensuing war shook Draenor for thousands of years, with control of the world constantly moving back and forth between the two forces.[7]

The battles over time took their toll on the colossals. Just as they had broken off from Grond, pieces of their bodies that broke off came to life as the magnaron. The colossals called on the magnaron to fight the Evergrowth but they did not obey. Some did indeed battle the forces of Botaan, but not out of loyalty to the colossals, and others simply left the battlefield to seek out areas of volcanic activity. The colossals' numbers were dwindling and they had to take drastic action or they would fail. The titan discs that made their armor contained immense power, and that power would stop the Evergrowth. The colossals piled onto Botaan and unleashed the energy in unison, creating a massive explosion. It shattered the bodies of Botaan and the colossals and sent the pieces all across Draenor. Over time, the scattered pieces of their bodies would sink into the ground and become veins of blackrock ore.[7]

Botaan's death released spores infused with the Spirit of Life. It affected some magnaron, turning a number of them into gronn, but legends say that a few surviving colossals were affected as well. As millennia passed, their bodies diminished and became flesh. When mortal civilizations came to power on Draenor, the colossals were long dead and only their skeletons remained. Creatures such as the orcs would discover their bones and fashion trinkets, dwellings, and weapons from them. The colossals' remains were believed to contain power.[8]

Temples of the Damned

Main article: Temple of the Damned

The Temples of the Damned, also known as grombolar or "bowels of the giant" in Orcish, were said to be "formed from petrified carcasses of the race of giants that inhabited the Orcish homeworld."[9]

The massive skeletons of several colossals can be found in various locations throughout the alternate Draenor. The Thunderlord orcs are said to have hunted the giants[3] and commonly construct their homes and hunting halls from the creatures' gigantic bones.[2][5]

The skeleton of a particularly large colossus, rumored to be the last of its kind, served as the Thunderlord's home city of Grom'gar in Frostfire Ridge.[3] The similar but smaller location of Colossal's Fall was considered sacred by the Thunderlord, as they claimed that it was their clan who felled it many decades ago.[10] According to an orcish legend, the largest beast to ever walk the world was a colossus named Gorgrond, and when it fell its body became the large landmass of the same name. Its spine became the mountains, its blood the ore and its will the savagery that rules Gorgrond's inhabitants.[4] This legend may have been inspired by the story of Grond.

The remains of two other colossals — Agurak's Fall and the Boneslag — can also be found in Frostfire Ridge. The skull of another looms over Deadgrin. Another skull can be found far to the east off the coast of Gorgrond, submerged near two small islands that are not marked on the map. It has fungi growing out of its eye and mouth. A seventh can be found directly west of Oshu'gun, overlooking the Ancestral Grounds.

The Horde Player's Guide says that "ogres were one of the last races of Draenor's giants."[11] This is implying that there has been more than one race of giants that have lived on Draenor, which was later confirmed.