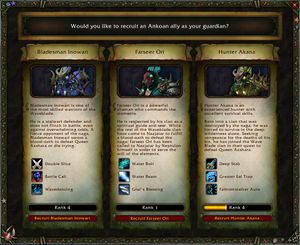 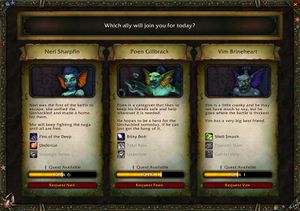 Combat allies is a system in Nazjatar that is one of the ways that characters can level out their powers.

In this system, players can take out one of 3 allies. Combat allies gain experience by completing world quests, killing rare spawns or doing their own daily quests that unlock whenever you take one of them out with you. As a combat ally is leveled out they will gain new abilities and eventually unlock other cosmetic rewards. Each combat ally has 30 levels.[1]

The combat allies are part of the Waveblade Ankoan for the Alliance and part of the Unshackled for the Horde.