Commander Duron is a level 70 quest giver located at the Stair of Destiny in the contested territory of Hellfire Peninsula.

The initial Alliance Expeditionary Force could cross to Honor Hold during the Dark Portal Opens event, however, the demons tried to retake the Dark Portal. Duron, leading the Alliance forces, joined forces with the Horde and received reinforcements from Relthorn Netherwane from Azeroth.[1]

Soon after the entering, Duron sent a messenger to find a scout that would alert Honor Hold with the presence of a new army. Later, he accepted the army of draenei led by Amaan the Younger. He then defended the Portal before the forces of Ragnok.[2]

When he realized he could hold back the demons,[1] he prepared a report and sent a soldier to deliver it to Marshal Isildor.[3]

The subject of this section was removed from World of Warcraft in patch 6.0.3. 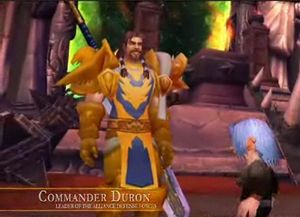