Commander Schnottz is a key character in the contested zone of Uldum. 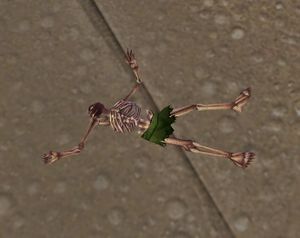 Before amassing his current force, Schnottz dealt in animal furs as a leatherworker.[1]

Schnottz commands a sizable armed force in the area, but his motives remain a mystery which adventurers must find out. Through the quest chain at Schnottz's Landing, Schnottz becomes the target of an assassination attempt by an unknown figure and ultimately blames the player whom he tries to execute by firing squad. It is then that players discover the Commander is a servant of Deathwing the Destroyer sent to Uldum to discover the "Ultimate Weapon" capable of destroying all life on Azeroth. Harrison Jones arrives at the nick of time to save the player which forces Schnottz to retreat to the Temple of Uldum. Schnottz is not seen again until Jones and the player storm the temple to get to the artifact before him. In order to stop the duo permanently, he unleashes an Obsidian Colossus which is subsequently demolished. Schnottz next ambushes the pair just as they are about to claim the Coffer of Promise. As the duo watch helplessly, Schnottz and his black dragon companions begin to destroy the coffer, but the unexpected occurs. Brann Bronzebeard, out of nowhere, activates the Coffer's defenses which proceed to kill the two dragons and obliterate Schnottz, leaving a smoking skeleton where the wicked goblin once stood.

Despite this, he somehow survived, and as Balloon Commander Schnottz he is a part of the Spring Balloon Festival.

He is directly involved in the following quests: