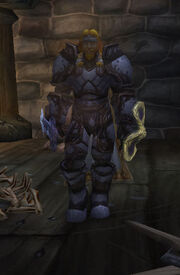 Commander Springvale is the third boss in Shadowfang Keep. By dungeon teleport, he is located in the Chapel.

Tank Commander Springvale facing away from the group and have DPS focus on killing his adds first, moving out of his Desecrate as needed.

Commander Springvale begins with 2 adds and periodically summons two more, one from each hallway, that need to be killed quickly. He will periodically cast Desecration under the tank and the melee which players must move out of. The tank will need to move him away from Desecrate, but due to Shield of the Perfidious he should not be turned to face the group. Therefore tanking him against a wall and kiting him along it is recommended. The boss remains stationary while casting the shield and the tank can move out to avoid damage. Springvale's adds do weak melee attacks so, if needed, a plate-wearing DPS can pick them up while the tank is managing the boss. Both adds cast Unholy Empowerment on him which gives him an extra stack of unholy power, and heal him. These should be interrupted as often as possible, especially the heal. Adds can and should be CC'ed so that only one is active at a time. The achievement To The Ground! requires especially coordinated add management. This fight has a high DPS requirement and groups may opt to skip it and move on, as it is not required to finish the instance.

It is also possible to burn cooldowns early and focus fire the boss, while the tank picks up adds. This strategy will be more taxing on the healer and still requires high DPS output. Although just as difficult to accomplish, the primary advantage of this method is that the length of the fight is greatly reduced. 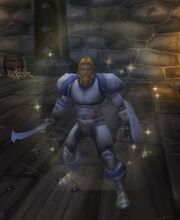 Aggro
Intruders in the keep! To arms!

Death
Our vigilance is eternal...

As a paladin, he may have been a member of the Silver Hand.