For the character from the main universe, see Tharbek.

Ironmarch Commander Tharbek is the commander of the Ironmarch, serving under Warlord Zaela and was intially found at the site of the Dark Portal. He later meets his demise within Blackrock Stadium, the arena of Blackrock Spire. 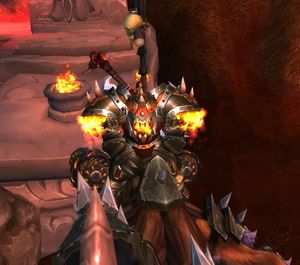 Tharbek in the Blasted Lands.

A cunning warrior of the Warsong clan, Tharbek was entrusted with the task of leading the expeditionary Ironmarch assault through the Dark Portal. Following Garrosh's instructions, he made his way to the home of the Blackrock orcs in Azeroth to rally forces for the next phase of the operation.

After sending out waves of lesser minions, Commander Tharbek swoops in atop his vicious rylak mount, the Ironbarb Skyreaver. Once the rylak is sufficiently injured, Tharbek dismounts and attacks on foot.

Tharbek, Commander of the Iron March

Aggro
Now let us finish this.

Death
My Warlord, I have failed you.

Unused quote
Finally, now you will pay for embarrassing me!