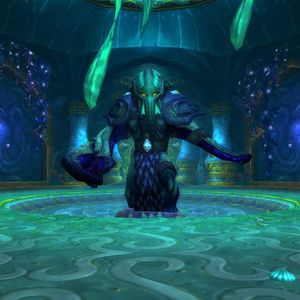 Commander Ulthok, the Festering Prince is the second boss of the Throne of the Tides instance. He jumps in and lands directly in front of players after defeating Lady Naz'jar and activating the defense system.

Ulthok is an incredible ancient being sent by his Old God masters to aid Lady Naz'jar with invading the Throne of the Tides. Bristling with sinister powers, Ulthok commands legions of his fellow faceless ones in the deepest trenches surrounding Vashj'ir.

Avoid the Dark Fissures that appears in front of Commander Ulthok. Healers need to make sure everyone stays topped off, especially him or herself, so that they don't die to squeeze. If the tank feels confident about holding aggro, then kiting Commander Ulthok around the room will help greatly to avoid the Dark Fissure and his Enrage. Before the first Dark Fissure he will slow the tank, so stay mobile at the start. The Dark Fissures spread out on Heroic mode, much like Putricide's gas in ICC. What this means is that once dropped, the Fissure will slowly expand until it covers everything. This means you need to plan where to drop each one so as to leave yourself enough room to finish the fight before you are engulfed.