Common writing inside a human book

Common (or the Common tongue)[1] is the native language of the humans.[2] It is mostly spoken by the members of the Alliance. Dwarves and gnomes learned it for trade purposes with the humans. Their children learn Common alongside their respective native languages.[2] Gutterspeak is derived from Common. It is assumed that when Horde and Alliance figures speak with one another, they speak in Common. In-game, all Alliance characters understand Common,[2] and its counterpart for the Horde is the Orcish language.

Murlocs can understand Common.[1] The arakkoa Grizzik could speak Common, having learned it after watching the Alliance Expedition for only a short time.[3] The furbolg Unng Ak could speak a broken form of Common as far back as during the War of the Ancients.[4] Garrosh Hellscream and Perith Stormhoof too can speak Common.[5]

Some blood elves find Common to be a crude language,[6] and Conqueror Krenna calls it a "pig-tongue".[7] 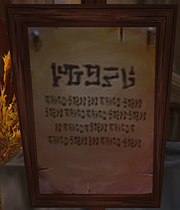 This is the list of words created by the in-game language parser for the Common language, which is listed as language number seven (word range 423-546) in the Language text file. In the in-game translator, the language parser for Common shares similar words with Gutterspeak and Gnomish. The parser is used to mask both npc and players that speak "Common" when encountered by the Horde.

Note: The language algorithm used by the in-game "translator" merely makes the words look like Common. It does not actually use a specific dictionary. Therefore, translated in-game speech isn't true Common. 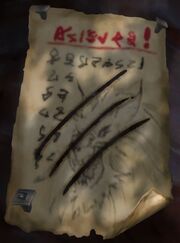 A Gilnean poster warning citizens of the worgen.

Dialects or languages derived or related to Common include Low Common, Gutterspeak, and Nerglish. Common is known by many races, and it is used as a universal language by most members of the races of Azeroth and Draenor.[15] Most if not all races have at least some understanding and speak some dialect of Common.

Because Common is a universal language known by many races, characters that have never had contact with other races are often able communicate with each other on their first meeting. Other racial languages (Orcish, Taur-ahe, Gnomish, etc,) are normally limited to their specific races, but are often learned by races that are most likely to encounter those races or read their language.

The modern "Common" seems to share words with the English language, mixed with words from an ancient tongue (actually some Welsh, Latin, and other historical languages). For example, half-ogre is the Common term for the race that is a mixture of ogre and orc ancestry, whereas mok'nathal (lower-case) is the Orcish term for the same race.[16] At least two known dialects of true Common exist, a modern dialect, which relies more on English, and the "ancient tongue", from which the modern Common is derived.[17]

Human parents grant a child its given name at birth, while its family name has a long history and usually speaks something of its bearer’s ancestry. Some humans change their family names to emphasize their own accomplishments.

Common may be a universal language as a variety of races speak it with one another in-game, and the language was used to communicate between the tauren and night elves as early as 10,000 years ago.

The monument behind Lion's Rest has Common carvings in it, utilizing a variant of the Elder Futhark runic alphabet from ancient Scandinavia. Taking time to match letters with one another and translate the entire tablet showcases a full alphabet. This translation was completed by Cannibal. 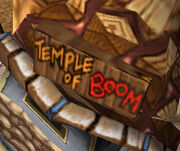