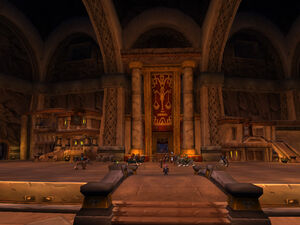 The area known as the Commons is the main thoroughfare for trade in the city of Ironforge. It contains the bank, Auction House and inn, as well as a few shops. The Commons is always the busiest and most crowded portion of the city.

Ironforge was the home of the original Alliance auction house, and before expansions pulled away the top level population, this area was infamous for its lag.