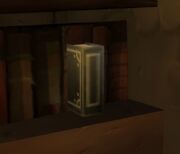 The Compendium of the Fallen can be found in the Scarlet Monastery.

With Kel'Thuzad's success in Lordaeron, the Lich King made the final preparations for his assault against human civilization. Placing his plague energies into a number of portable artifacts called plague cauldrons, Ner'zhul ordered Kel'Thuzad to transport the cauldrons to Lordaeron where they would be hidden within various cult-controlled villages.

The cauldrons, protected by the loyal cultists, would then act as plague generators, sending the plague seeping out across the unsuspecting farmlands and cities of northern Lordaeron.

The Lich King's plan worked perfectly. Many of Lordaeron's northern villages were contaminated almost immediately. Just as in Northrend, the citizens who contracted the plague died and arose as the Lich King's willing slaves.

The cultists under Kel'Thuzad were eager to die and be raised again in their dark lord's service. They exulted in the prospect of immortality through undeath. As the plague spread, more and more feral zombies arose in the northlands. Kel'Thuzad looked upon the Lich King's growing army and named it the Scourge - for soon, it would march upon the gates of Lordaeron...and scour humanity from the face of the world.