Conclave of the Chosen 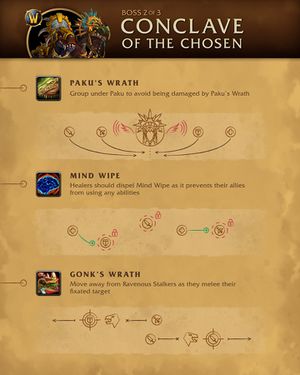 Overview of tactics for the Conclave of the Chosen fight.

Conclave of the Chosen is a boss in the Battle of Dazar'alor raid. In this encounter, the Alliance faces off against the powers and champions of the loa Gonk, Pa'ku, Kimbul, Bwonsamdi (Mythic difficulty only), Krag'wa, and Akunda, the champions are called Gonk's Aspect, Pa'ku's Aspect, Kimbul's Aspect, and Akunda's Aspect.

This encounter is part of the Battle of Dazar'alor raid where Horde characters are transformed into soldiers of the Alliance.

Deep within Dazar'alor lies a chamber built to honor six of Zandalar's greatest loa, guarded by their most devout followers. Trespassers who dare enter this sacred hall are soon met with primal fury like none they have ever seen.

A pair of aspects join the fight at the start of the encounter, while the others observe. Each time an aspect is defeated, any other active aspects heal to full and receive a stack of Loa's Wrath. Afterward, a new aspect joins the fight.

Throughout the encounter, the loa appear to unleash their wrath, with an additional loa being added to the rotation when a new aspect enters the fray. The encounter ends when all the loa's aspects are defeated.

Raptor Form
Gonk's Aspect yells: Dere is no escape for you!

Bwonsamdi's Wrath
Bwomsamdi yells: Well, if ya so eager for death, ya shoulda come see me sooner!
Bwonsamdi yells: Sooner or later... everybody serves me!