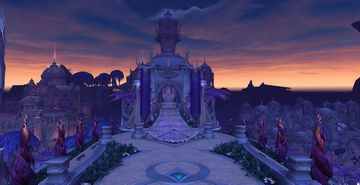 View along the bridge from the northwestern end, with the Nighthold in the distance above

The Concourse of Destiny (or the Parade Grounds)[1] is a large bridge structure running through the center of the nightborne Suramar City. It connects the Grand Promenade in the northwest to Astravar Harbor in the heart of the city further south. A series of stairways on the bridge allows one to traverse Suramar's various levels, while a teleportation elevator provides access to the Aetherium below.

The Concourse of Destiny is decorated with a great many statues, vegetation, and benches, suggesting its function as a meeting place for the nightborne people. The bridge itself is a part of a major road highway that runs from the city through the wider Suramar region to another Temple of Elune, and eventually on to Black Rook Hold in Val'sharah.

Running through central Suramar and connecting much of the city, the Concourse of Destiny is thus a major feature utilized by nightborne residents. At the time of the third invasion of the Burning Legion, the bridge was guarded and patrolled by forces of the Duskwatch, Suramar's main peacekeeping force.

Eventually, the Nightfallen rebellion erupted in the Suramar region, and Suramar City became the focus of increased tension between those loyal to Grand Magistrix Elisande, and those who supported the revolution. At the conflict's climax, the city itself was assaulted by the Nightfallen and their allies, who succeeded in seizing and holding a foothold. Battling to reach the Nighthold, the attackers clashed with Duskwatch defenders for control of the Concourse of Destiny. Chief Telemancer Oculeth notably engineered a mass teleportation spell to forcibly force Duskwatch troops off the plateau.[2]

Ultimately, the Nightfallen were successful in reaching the Nighthold. Kirin Tor mages were subsequently left behind to hold the Concourse's upper level and keep the path cut through the city open.