Not to be confused with Constellas. 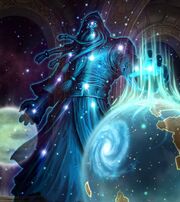 The constellar are a race of mysterious celestial beings who resemble large humanoid-shaped constellations. During the early ages of the universe, when the titan Pantheon brought order to countless worlds throughout the cosmos, the titan leader Aman'Thul called upon the constellar to observe the many worlds ordered by the Pantheon. The constellar stayed vigilant for any signs of instability, and, when necessary, initiated a fail-safe procedure to scour a planet of life and reset its evolutionary process.[1]

The only constellar known by name is Algalon the Observer, who was commissioned by Aman'Thul to serve as Azeroth's celestial guardian.[2]

When the Burning Legion invaded its first world, Sargeras himself annihilated the constellar charged with overseeing the unnamed planet.[3] Aggramar was ordering Draenor at the time and sensed that constellar's death, leading to his confrontation with Sargeras.[4]

Constellar Designates are adds during the Argus the Unmaker boss fight.