For information on how to defeat Cordana in Vault of the Wardens, see Cordana Felsong (tactics).

“I don't even know what you're fighting for anymore.”

Cordana Felsong was a night elf warden who was Khadgar's bodyguard during his travels around Draenor, accompanying the archmage everywhere he went. Despite sometimes being annoyed by his casual and laid-back demeanor, Cordana was very loyal to him and guarded him with her life, advising against him taking unnecessary risks.

However, as Khadgar's game of cat-and-mouse with Gul'dan continued, she became increasingly frustrated with the archmage's seeming lack of concern for others' safety, and increasing ruthlessness in his methods. Gul'dan was able to prey on her doubts and eventually turned her into his new agent for the Burning Legion. Only with the aid of powerful champions of the Alliance and Horde was Cordana finally defeated within the Vault of the Wardens, during the Burning Legion's third invasion of Azeroth. 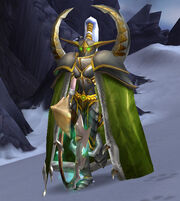 Cordana Felsong from Maiev's group of Watchers was sent to assist Khadgar in the new threat and remained in contact with Maiev throughout the campaign.[4]

Cordana participated in the Assault on the Dark Portal and was one of the first heroes to enter the alternate universe alongside other Azeroth's leaders. When the vanguard attacked the Iron Horde, she was overlooking the fight. After the Portal was disabled, she accompanied Khadgar and his group into the eastern part of the jungle, running through the camps of the Iron Horde. Once she fought back in Kargathar Proving Grounds and escaping the Umbral Halls, she joined the adventurer in battling the blackrock orcs. When the area was flooded, she fought against the orcs under the Worldbreaker. After the Dark Portal collapsed, she left with Khadgar on the ships of the Iron Horde.

In Shadowmoon Valley and Frostfire Ridge, she worked closely with Khadgar to hunt down the Shadow Council. In Shadowmoon, Cordana and the commander entered the woods near Gul'var and caught demon All-Seeing Eye. She ordered Khadgar not to go to the Shadow Council's settlements. In Frostfire, she asked the Horde commander to speak with the Frostwolf orcs in Throm'var on their behalf. When Khadgar was nearly assassinated by Garona Halforcen, Cordana fought her off and forced Garona to flee.

Cordana later joined Khadgar at Zangarra, the Kirin Tor's base in Talador. As Khadgar searched for Gul'dan, the warlock once again sent Garona. This time, the assassin succeeded in stabbing and poisoning Khadgar. After Cordana recovered, she ordered the commander to hunt Garona down while she stayed with the archmage and called for help. When the commander caught Garona and returned to the tower with her antidote, Khadgar refused healing magic and instead told Cordana to stitch him back up so he could return to tracking Gul'dan.

After the death of Blackhand, Cordana helped Khadgar break Garona free of Gul'dan's control. She stopped Khadgar's initial attempt to interrogate Garona about her master, seeing it as torture.[8] Khadgar agreed and backed off, sending the commander to get a Shadow Council

[Orb of Dominion]. After using it to break Gul'dan's hold over Garona's mind, Cordana took the orb away to destroy it. She stayed behind in Zangarra while Khadgar and Garona traveled to Bladefury's Command to apprehend Gul'dan.

Due to the Orb of Dominion's influence, Gul'dan was able to corrupt Cordana from afar. When the commander brought her a number of Tomes of Chaos from Hellfire Citadel to destroy, she instead attempted to use the fel magic within them to take the ring Khadgar had given the commander. The commander was forced to fight her until she retreated through a demonic portal, vowing that the Burning Legion would soon come to destroy Azeroth. Khadgar was visibly stricken with grief at her betrayal. 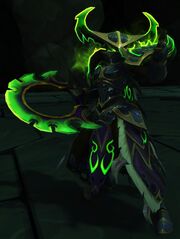 In the Vault of the Wardens.

Working with Gul'dan, Cordana led him into the Vault of the Wardens on the Broken Isles, to the chamber where Illidan's corpse had been locked away after his defeat at the Black Temple years before. Cordana and Gul'dan were confronted by Maiev Shadowsong and demon hunters which she had freed to fight off the Legion invasion. Maiev told Cordana that she would answer to the High Council for her treachery, but Cordana and Gul'dan escaped with Illidan's corpse.[9]

During the Battle for the Broken Shore, Cordana was summoned by Gul'dan in front of the Tomb of Sargeras.[10]

She contacted the Felsworn Cailyn Paledoom through a Legion Communicator in order to discover nearby dragons' moves.

Cordana remained in the Vault of the Wardens with the

[Sargerite Keystone] that had been kept there. She tempted many demon hunters to join the Burning Legion before ultimately being slain.[7][11] Following her death, the Deathlord of the Knights of the Ebon Blade used her eye to help create Rottgut.[12]

Cordana Felsong is a female night elf rogue and a warden. She uses her spell-like abilities to appear and disappear within shadow. She casts

[Silence] first, to unnerve her opponents and to prevent spellcasters from using verbal spell components. Then she targets one foe and appears from the darkness nearby, attacking swiftly and retreating for another pass.

Cordana is described as: "She steps from the shadows as if emerging from a dark pool, her delicate features forming in front of those she encounters. Tall and lithe, she wears no armor but carries an impressive silvery blade as if it weighed nothing. Her cool gaze sweeps across them, and they feel as if they have been judged — and barely deemed acceptable."[13]

She might have told Gul'dan about the Vault of the Wardens and maybe even about Illidan after she was corrupted by the orb.