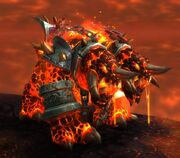 It can rarely be listed on the Black Market Auction House by Majordomo Executus, for the opening bid of 20,000

This item was awarded by the achievement

[Boldly, You Sought the Power of Ragnaros] during

It is sent to your mailbox by the WoW Dev Team upon completion:

Can you believe it's been ten years?

We wanted to thank you for joining us in our celebration of the tenth anniversary of World of Warcraft with this adorable fiery fellow, plucked from the Firelord's litter.

Molten to the core!

This is the only item in the BMAH to be listed by a deceased character in lore.