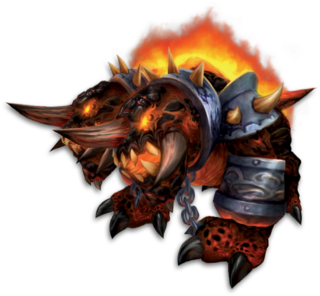 A core hound is a quadrupedal elemental monster that originates in the Firelands of the Elemental Plane, and also live in the Molten Core. They are the vicious but faithful servants of the Firelord and his minions.

They come in two varieties, the much more common, and larger, two-headed variant, and the smaller one-headed variant. The latter are used by the Dark Iron dwarves as racial mounts.

A core hound has the appearance of a massive bulldog with two heads, each equipped with a mouth filled with rows of flaming teeth. Its body is covered with armored hide and studded with bony spikes. A streak of flames runs down its spine from head to stubby tail.

Core hound hide can be used to fashion armor.[1] 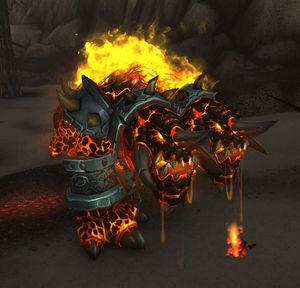 The oldest and most powerful of the core hounds is Magmadar, the alpha male and sire of the entire current pack. Every core hound can trace their lineage back to Magmadar.[2]

Core hounds originate from the Firelands of the Elemental Plane, however they also lived alongside their master Ragnaros in the Molten Core and recently started to invade Mount Hyjal. The largest is known is Magmadar, and Golemagg the Incinerator seems to treat them as pets. There is also a small captured one in upper Blackrock Spire known as the Beast, who has swallowed gnome explorer Finkle Einhorn. Their leather,

Core Hounds are a family of exotic Ferocity pets, only tamable by Beast Mastery hunters starting at level 65.

Core Hounds, through use of their

[Ancient Hysteria] ability, can increase melee, ranged, and spell casting speed by 30% for all party and raid members for 40 seconds. This makes them a good choice in raids when player-provided buffs such as

[Time Warp] are not available. They also have a special exotic ability,

[Lava Breath], which reduces the target's casting speed by 10% for 10 seconds. They retain their signature roar when tamed, though the loudest is Chromaggus.

"Traditional" red core hounds can be found and tamed in Molten Core, Mount Hyjal or Blackrock Spire. However, other beasts lore-wise not related to core hounds also count toward this pet family:

Core hounds use simple tactics, attacking the most obviously threatening target first. They will typically attempt an improved grab or bull rush to push their target into nearby lava. A core hound with flaming breath takes hold of a victim before using its flaming breath, thus preventing the victim from escaping the effect. Core hounds grow and gain power throughout their lives. Core hounds understand Kalimag but cannot speak.[4]