Core races[1] are a type of playable race in World of Warcraft. These races speak a number of languages, have different racial traits, and can pursue different classes.

Playable races in World of Warcraft belong to one of the game's two main factions: the Alliance or the Horde. The playable pandaren are the only exception, starting the game as neutral before later joining one of the two factions. For playable characters, choice of race is therefore restricted by faction. Additionally, the races you are able to play are always meant to belong to their main in-game faction, meaning playable humans are always from Stormwind, playable blood elves are always from Silvermoon City, etc.[2]

Allied races are another type of playable race that need to be unlocked before being able to play them. 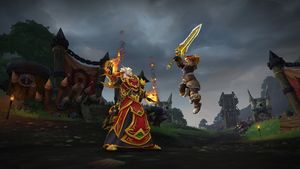 A blood elf vs. a dwarf.

Base stats vary depending on the class. The race's stat modifiers are applied on top of the class' base stats:

World of Warcraft's first expansion, The Burning Crusade, brought Blood Elves for the Horde, and Draenei for the Alliance into the game as playable races. The third expansion, Cataclysm, introduced Worgen for the Alliance and Goblins for the Horde. It also added a number of new race/class combinations. The fourth expansion, Mists of Pandaria, introduced Pandaren as the game's first Neutral race. Pandaren characters would choose between the Alliance and Horde after completing their starting zone at level 10.

In August 2012, Blizzard Entertainment informed that patch 5.0.4 would remove the expansion requirement on all races so far requiring one. This gives all players, regardless of what version of World of Warcraft they have, the ability to create characters of all races.

With the release of patch 5.0.4, we’re making all the races of Azeroth playable by anyone, no matter which version or expansion of World of Warcraft they own. This includes the enigmatic pandaren, who will become available for play when Mists of Pandaria is released on Tuesday, September 25. We want the entire World of Warcraft community to be able to embrace their inner goblin, blood elf, worgen, draenei, or pandaren from the moment they step foot into the world of Azeroth.

Now, the only hard part will be choosing a name. Who will you be next?

Posts by Zarhym, on a player-created thread regarding this announcement, later clarified some details:

(Thread created by Pandorä, 8/16/2012 10:52 AM PDT)
I've seen some confusion about when pandaren character creation will be accessible.

Just to be clear on the announcement, we're making it possible for people to create a character of any race, regardless of what expansions you've purchased. So if you only have the original game (which now has The Burning Crusade included), when patch 5.0.4 hits you'll be able to create goblin and worgen characters as well. And, once Mists of Pandaria is released, you'll be able to create pandaren characters, regardless of whether or not you own Mists of Pandaria.

So it says all races, what about though all classes? Just because Pandaren become available for play regardless if you have MoP or not, does this include the new monk class?
(Posted by Novagosa, 08/16/2012 10:54 AM PDT)

No, you'll need to upgrade your World of Warcraft license to Mists of Pandaria in order to unlock the monk class. The same is true for leveling from 85-90 and gaining access to the continent of Pandaria.

The starting areas will be accessible as well. For example, you'll be able to adventure on the Wandering Isle as a pandaren when Mists of Pandaria is released, but you won't be able to visit Pandaria. They're separate locations.

You're specifically talking about character creation. How will this affect paid race changes? Will I be able to race change to Pandaren on my existing shaman on August 28th or do I have to wait until September 25th?
(Posted by Rehvin, 08/16/2012 11:11 AM PDT)

The thread with these comments contained some additional comments by Zarhym which are not included on this article.