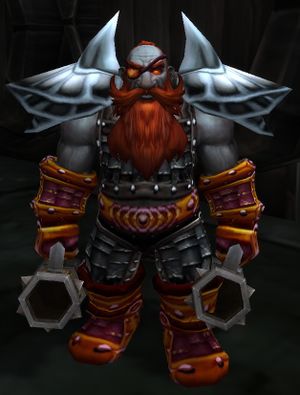 Coren Direbrew can be found in Blackrock Depths during Brewfest. Players may fight him endlessly, in order to obtain his trinket collections. The

[Great Brewfest Kodo] drops however, are only available via the daily drop bags.

The original Brewfest was a contest held by Chen Stormstout and Grimbooze Thunderbrew to decide which of the two made the better beer. However, Coren fought and whined his way into the contest as well. While Chen and Grimbooze were quite even in votes on their drinks, Coren only had two votes - one from himself, and one that Chen had given him out of pity. Angered, Coren attacked, but was knocked into the air by Chen and landed in an open keg, getting soaked in beer. Fuming, Coren climbed out and stalked off. Since that day, Coren and his minions have attacked every Brewfest annually.

Coren is not only unable to let go of a grudge, but remains sensitive about his work. While his current Dire Brew is an excellent product, he will not suffer critics, and the last person to insult his brew was fed to dire boars.[1]

[Bear Form]. It was one of Direbrew's proudest moments.[2]

Fight starts with the boss and 3 regular adds. Defeat them quickly and then nuke the boss. Occasionally drills will spawn (like during the Dark Iron Attack at Brewfest proper), knocking players back and spawning another add. Ranged DPS and healers need to avoid Coren Direbrew's melee range, or they may be disarmed and receive heavy damage. Otherwise, put damage on the boss while taking care of adds, specifically killing the brew maidens quickly so there's less chance they can stun someone if they're slow to use the tossed drink.

As of 2017, all items - including those in the Keg-Shaped Treasure Chest - scale to your character level when you acquire them.

Since normal loot rules applied to these items, in 2009 a person could 'farm' Coren for one of those drops, as long as they could continue inviting people into the group who had not started the event (IE make Coren hostile) that day. The 2010 event enforces that each character only has one chance per day to get one of the special items through the keg.

Gossip
Ye've got some stones, lad, comin' in here unannounced.

What do ye want?

What?! What did ye say?! How dare ye! Me beer can stand up to any of that rot they serve at Brewfest!

You'll pay for this insult, <class>!

Apologize
Nothing is said, 'cancels' insult.

Death
Coren Direbrew yells: Your Brewfest is a sham! One day, everyone will recognize that Dire Brew is the best!