Corlain is the regional capital and largest city of Drustvar, serving as the seat of power for House Waycrest. The settlement itself is divided into an upper and lower section, with Waycrest Manor dominating the northern portion of town. The Waycrest Guard are responsible for keeping order within Corlain.

Corlain is surrounded by numerous outlying fixtures, including an armory to the south, aviary to the north, Bleak Hills Mine to the east, and Whitegrove Chapel to the west. The city has its own access to the sea via Chandlery Wharf, and is further protected by the Watchman's Rise outpost covering the eastern approach.

In recent times, Corlain has fallen completely under the control of the Heartsbane Coven, along with much of Drustvar. Led by Lady Waycrest herself, the witches have occupied the city, corrupted the guards, and continue to use its citizens in horrifying rituals. Those who survived the disaster have fled to Arom's Stand seeking refuge, while the Order of Embers wages a war to drive the Coven from the city.

House Waycrest secured its position in Drustvar when they finally defeated the Drust, safeguarding all of Kul Tiras. Since then, they have ruled over Drustvar as lords, traditionally residing in Waycrest Manor surrounded by Corlain.

Due to its size and proximity to the manor, Corlain became one of the first victims of the Heartsbane Coven of witches. The Coven was founded in Corlain, and secretly led by Lady Waycrest herself. In a matter of weeks, Lady Waycrest had the city's guard under her dark control and attracted many citizens of Corlain as initiates to her new coven. Most of the populace remained troubled, but unaware of the true threat until Waycrest acted. The Heartsbane seized control of Corlain easily, capturing or killing most of the citizenry. Some survivors fled to Arom's Stand, while those who could not became mindless slaves to the witches.

As the Coven's influence began to spread across Drustvar, Corlain became the center of their operations and plans. Lady Waycrest, the "Mother", secluded herself within Waycrest Manor, while her followers busied themselves in the fallen city. Many more coverts were recruited and trained within Corlain, and the witches' ranks expanded rapidly. While most of the defenders were corrupted against their will, a brigade of halberdiers under Captain Goodspeed willingly joined the Heartsbane. 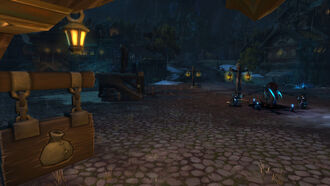 The darkened streets of Corlain

The newly-refounded Order of Embers eventually arrived on Corlain's outskirts with the aim of liberating the city and putting an end to Lady Waycrest. Under the direction of Lady Lucille Waycrest, the Inquisitors occupied Watchman's Rise on the outskirts and launched a campaign against the Coven. The former guards of the city under the spell of the Heartsbane were too far gone to save, and had to be killed along with the witches.[2] Starting with lower Corlain, the Heartsbane's lieutenants and their servants were slain, while many of the enthralled citizens were saved.[3]

A powerful barrier placed on the main gate barred passage into Upper Corlain and Waycrest Manor. With some silver recovered from Bleak Hills Mine, however, the Inquisitors fashioned explosives to break through. In the city's upper reaches, they once again cut through the Coven's toughest forces and killed their matrons, before pushing through to the Manor.[4] There, Lucille Waycrest and her party were confronted by her mother, Lady Waycrest. Lady Waycrest ultimately retreated inside the Manor, where the Inquisitors pursued her. Deep in the house's cellar, the finally slew Lady Waycrest, ending her plans and striking a critical blow against the Coven in Corlain and all of Drustvar.