From Wowpedia
(Redirected from Corrupted Ancient)
Jump to: navigation, search

Corrupted ancients are ancients and Draenor ancients corrupted by the Emerald Nightmare,[1] the fel magic of the Burning Legion, or by the arcane.[2]

The great tree is warped, with rotted black bark sickly yellow leaves. The twisted face in its trunk snarls in hatred, a putrid stench roilling from its maw. Its rootlike legs and gnarled, branch-like arms smash though the underbrush as it lunges through the forest.[3]

Once stalwart defenders of nature, the corrupted ancients fell before the might of the Burning Legion. They were corrupted by demonic energies and now seek to spread their sickness and hatred among all living creatures. The great tree is warped, with rotted black bark and sickly yellowed leaves. The twisted face in its trunk snarls in hatred, a putrid stench roiling from its maw. Its root-like legs and gnarled branch-like arms smash through the underbrush as it lunges through the forest. Corrupted ancients are driven by demonic energies to destroy everything in their path. Foes who do not fall before the corrupted ancient's overwhelming strength are exposed to the deadly poison the creatures exhale. Unlike the trees that produce life giving oxygen, a corrupted ancient exhales a poison gas.[3] 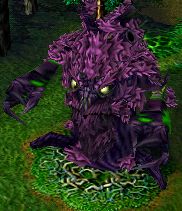 As seen in Warcraft III.

The Corrupted Ancients were a group of satyrs, corrupted ancients, corrupted treants and skeletons in service of the Burning Legion commanded by the dreadlord Tichondrius.