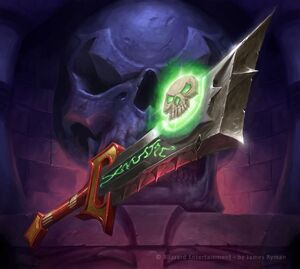 Artwork of the Corrupted Ashbringer by James Yman. Has not been used in the TCG currently.

Corrupted Ashbringer is an epic two-handed sword that could be looted in Naxxramas prior to patch 3.0.2.

Death knight and former Highlord Alexandros Mograine could be seen wielding Corrupted Ashbringer in the original Naxxramas. It was once Ashbringer, but became corrupted when Mograine's son Renault used it to kill him. It is unique in that it triggers a scripted event within the Scarlet Monastery, and the whispers of Alexandros can be heard by the wielder.

In Wrath of the Lich King, Corrupted Ashbringer is wielded by Alexandros' son, Highlord Darion Mograine, until Tirion Fordring purified it at the Battle for Light's Hope Chapel at the end of the Death Knight quest chain.

This item dropped from the cache of the Four Horsemen in the Deathknight Wing of the original Naxxramas. In Wrath of the Lich King, Highlord Mograine has been replaced by Baron Rivendare in Naxxramas, and Corrupted Ashbringer cannot be looted.

Will of the Ashbringer 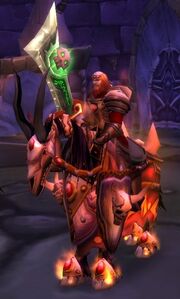 Highlord Mograine, as seen in Naxxramas

Equipping Corrupted Ashbringer will buff the player with Will of the Ashbringer, which makes Argent Dawn NPCs hostile, Scarlet Crusade NPCs friendly, and makes the player appear slightly darker. Furthermore, it enables a proc for the deceased Highlord Mograine to whisper one of twelve sayings to the wielder:

Mograine's whispers may also be heard by directly entering the following code:

His whispers recount the tale of his war against the Scourge, his betrayal by his son and the Crusade, and his resurrection as a death knight by Kel'Thuzad. He describes how his son, Renault, is blind to the truth that the Scarlet Crusade has become a vehicle for the Burning Legion's vengeance against the Scourge through Saidan Dathrohan. In the end, he asks you to kill them all, but it's unknown whether he means the Scarlet Crusade, the Scourge, or both.

There is also a second voice in the background, which is that of the Lich King, but it is more difficult to discern what is being said. However, in the final clip both voices are united in saying "Kill... them... all!"

These whispers may also be heard if you stand near Darion Mograine in the Acherus Hall of Command before finishing the Death Knight starter quests.

A scripted event can be triggered upon entering the Cathedral wing of the Scarlet Monastery with Corrupted Ashbringer equipped.

Scarlet Commander Renault Mograine welcomes the player as the crusaders bow before him or her. Unexpectedly, the spirit of his father, Highlord Mograine, appears in full Dreadnaught's Battlegear, and smites and kills the son for his betrayal and murder. The Highlord frees High Inquisitor Fairbanks' spirit from his undead form and disappears. Fairbanks proceeds to tell the story of Renault's betrayal and that the Corrupted Ashbringer is beyond redeeming. Luckily, Mograine has another son who resides in Outland and has the ability to forge a new Ashbringer. Fairbanks does not give any quests.

In World of Warcraft: Ashbringer, the true tale of the sword is told, and it is revealed that the second son of Alexandros, Darion Mograine, comes into possession of the Corrupted Ashbringer after killing his father in Naxxramas, as part of a failed rescue mission carried out by a small party of Argent Dawn members. Spurred on by his father, speaking through the cursed blade, Darion enters the Scarlet Monastery and confronts his brother Renault, who lashes out and attempts to kill him. Before Renault is able to deal the final blow, the Corrupted Ashbringer acts on its own, emitting an aura of green flames which take on the form of Alexandros, garbed in Dreadnaught armor. Renault begs for forgiveness and is quickly decapitated by his father, who then says he is forgiven. The spirit of Alexandros then retreats back into the blade. 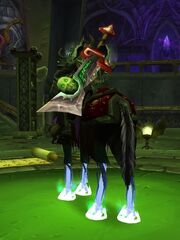 Highlord Darion Mograine with the

[Corrupted Ashbringer] in Acherus: The Ebon Hold during the Scarlet Enclave instance, prior to the Battle for Light's Hope Chapel.

In Wrath of the Lich King, Darion Mograine is revealed to have killed himself with the Corrupted Ashbringer in order to free his father's spirit, an act which leads to him becoming a death knight of the Scourge and Highlord of Acherus. He carries the Corrupted Ashbringer, which can be heard whispering when players approach him.

At the Lich King's command, Darion launches an attack against the Argent Dawn at Light's Hope Chapel. In the battle that ensues, the Corrupted Ashbringer begins to act on its own and fight against Darion's control. When the death knights are forced to surrender, Tirion Fordring reveals that the Lich King knowingly sent the death knights into a trap to draw him out. Shortly thereafter, the Lich King himself appears and easily defeats Darion, who in anger and desperation, throws the Ashbringer to Tirion. The blade is purified in his grasp and the Lich King is forced to retreat, leading to the founding of both the Argent Crusade and the Knights of the Ebon Blade.