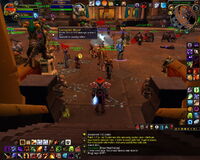 Corrupted Blood is an ability cast by Hakkar, the final boss of the Zul'Gurub raid. It causes direct damage to the target and all nearby enemies, and debuffs all affected targets with a DoT.

Originally this debuff would spread to nearby allies. Due to its contagious effect, it was unintentionally released into the larger game world and became the first virulent epidemic to affect entire realms. The resulting epidemic was named after this ability.

Patch 1.7.0, released 13 September 2005, saw the opening of Zul'Gurub, the game's first 20-player raid dungeon where players faced off against an ancient tribe of jungle trolls under the sway of the ancient Blood God, Hakkar the Soulflayer.

During the Hakkar encounter players were occasionally afflicted by Corrupted Blood, which would cause 263 to 337 damage every two seconds over four seconds (compared to the average health of 3000-4500 for a level 60 player at the time). The effect would also spread to other players who were simply standing in close proximity to an infected person. Originally this malady was confined within the Zul'Gurub instance, but made its way into the outside world by way of hunter pets and warlock minions.

Due to its brief duration players normally could not bring Corrupted Blood outside of Zul'Gurub. The only known way to carry it outside of the raid was through a simple process of spreading the debuff to a hunter's pet or warlock's minion and ensuring the affected pet was dismissed before the debuff expired. This allowed the pet to retain the debuff at its remaining duration when re-summoned. With this knowledge, some players dismissed their pets after deliberately infecting them, and brought them out later either through summoning or at the stable masters in capital cities, in order to maliciously infect the surrounding populations.

Within hours Corrupted Blood had infected entire cities, most notably Ironforge and Orgrimmar, which at the time acted as central hubs and featured the majority of player concentrations. Low-level players were killed in seconds from its damage. Higher-level players had enough health to survive an initial application, allowing the debuff to continuously spread and re-infect those who survived. Those who died and revived in populated areas often found themselves quickly re-infected. Corrupted Blood was also one of the only effects that could be contracted and spread by NPCs, causing them to unintentionally act as carriers and further amplifying the rate of infection. When spread, Corrupted Blood would always apply at its full duration, regardless of its remaining duration on the player who spread it. Confusion and panic had initially taken hold, as a large portion of the playerbase had not yet participated in or were familiar with the Hakkar encounter, and may have not realized they were spreading the contagion when attempting to flee while afflicted, while others played with the intent to spread the disease further. All of these factors allowed the normally brief debuff to both spread and persist for periods far beyond intended.

Initial efforts were made by some to prevent further infection, primarily by fleeing from densely populated towns and capital cities to sparsely populated areas, or by logging out of the game for long periods of time. Some players flagged themselves for PvP, which would prevent non-flagged players from infecting them, though this was quickly countered by malicious players who started flagging themselves as well. Blizzard responded with temporary countermeasures including rolling restarts to realms and a voluntary quarantine for players.

A permanent set of fixes were made in patch 1.8.0, rendering pets ineligible for Corrupted Blood and restricting its effects to the Zul'Gurub instance. Following these changes, patch 1.9.0 redesigned the mechanic and removed its ability to spread.

Despite its crippling impact on realms and the playerbase, fan reaction to the epidemic was strangely positive. The event's popularity directly influenced Blizzard in designing the Zombie Infestation pre-release world event for Wrath of the Lich King.[1]

In late April 2009, Reuters published an article discussing the causes and effects of the Corrupted Blood outbreak, and its relation to the swine flu pandemic. University researchers studied the Corrupted Blood progression, and through it could more easily understand the spread of real-life diseases.[2]

Although mechanics similar to the original Corrupted Blood were later used for other encounters, the original fight disappeared when patch 4.0.3a (the pre-World of Warcraft: Cataclysm patch) removed the Zul'Gurub raid instance from the game.

Battle for Azeroth introduced the plague of corrupted blood as part of Zandalar's backstory as a possible nod to the incident, where a plague caused by Hakkar led to the deaths of thousands.[3][4]

The incident is referenced in one of Mal'Ganis' poke quotes in Heroes of the Storm: "Don't get me wrong, I'm proud of the work I did with the Plague of Undeath. But Hakkar the Soulflayer's Corrupted Blood? Now THAT was a plague!"

In the Hearthstone expansion Rastakhan's Rumble, Hakkar appears as a legendary card with the ability to shuffle damaging, self-copying Corrupted Blood spells into both players' decks when he dies. In addition, his flavor text reads: "ATTENTION: Do not enter any major city while infected with the Corrupted Blood!" Team 5 tried a variety of different designs for Hakkar's ability and considered basing the card on some of the other abilities from the Zul'Gurub boss encounter. However, when they asked people what they thought of when they thought of Hakkar, the answer was always Corrupted Blood.[5] In February 2019, a few months after the launch of Rastakhan's Rumble, Blizzard released the "Mark of Hakkar" card back, which can spread from player to player as another nod to Corrupted Blood. Any time a player faces off against another player with the card back equipped, their opponent will also automatically unlock and equip it.[6] The card back was initially given to 200 players globally. In less than 24 hours, it had spread to the majority of the playerbase.[7]

In March 2020, PC Gamer published an interview in which the authors of a 2007 research paper on the Corrupted Blood incident discussed how the research from the incident was helping them understand the spread of the COVID-19 pandemic, specifically in terms of social behavior. One of the authors, Dr. Eric Lofgren, stated that one of the critiques the original study got was that griefing (in the form of players intentionally infecting others) isn't analogous to any real-world behavior. However, Lofgren added that while people in real life might not intentionally get others sick, "wilfully ignoring your potential to get people sick is pretty close to that. [...] Epidemics are a social problem... Minimizing the seriousness of something is sort of real-world griefing."[8]