Couatl are large flying beasts used by the naga for aerial support. They possess two crests running from their head to their lower back, and wings, which they can also use as fins to swim. Naga train them in Shrines of Azshara.

Morgala Darksquall summoned an immense couatl to attack the ship Wavecutter. She referred to it as a "dark denizen of the deep", and it was able to spit acidic venom.[1] 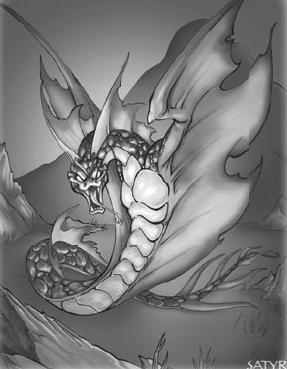 A couatl in Dark Factions.

Distantly related to wind serpents, couatl are rare creatures of great strength. Couatl are distinguished from their smaller cousins by their immense size (nearly twice the length of a normal wind serpent) and the brilliant display of bright yellow and green plumage across their heads and backs in two long rows. Their shorter, feathered tails serve to further distinguish them from wind serpents. Lastly, their wings are much greater and bear more feathers. Couatl nest in trees and crags dotting the coasts of Azeroth. Some are venomous, some are magical, some are both, and some are neither. Couatl occasionally disrupt magic, which makes some people think that they have an understanding or intelligence of it. This idea is incorrect — couatl are nonsentient animals. Recently, naga have returned to the surface of Azeroth and domesticated couatl. The naga breed these tamed couatl in order to optimize the lethality of their venom and train them to be fiercely loyal to their naga masters. Not all couatl are magical beasts. Like wind serpents, couatl vary in more than simply size and color. Some couatl are purely nonmagical in nature, yet still large and highly venomous. These couatl are animals, not magical beasts.[2]

Couatl can be found flying and swooping among the treetops of Zandalar. Their feathers are collected by adventurers.[3]

While the snap dragons and tidal guardians—two other naga creatures originally confined to Warcraft III—make appearances in Nazjatar in patch 8.2, the couatl remain absent. The fathom rays of Nazjatar bear some slight resemblance to couatl and may thus be intended to be the same type of creature.