From Wowpedia
(Redirected from Cougar)
Jump to: navigation, search 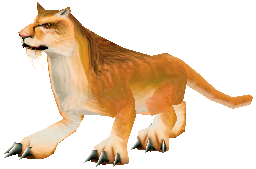 Mountain lions (sometimes referred as cougars[1][2][3]) are a variety of lions, usually found in the warm mountains and plains[4] of the Alterac Mountains and Hillsbrad Foothills. Across the open plains of Mulgore many animals roam, including mountain lions[5] (called cougar). Cougars can also be found in Thousand Needles.[6] One of the previously most famous hunter pets is the cougar Broken Tooth[citation needed] , because of its formerly 1.0 second attack speed.

These cats are about four feet long and weigh about 120 pounds. They usually hunt at night.[4]

A mountain lion's blood can be used in certain alchemy to create a death-brew.[7] Their claws can be used in a tauren cleansing rituals,[8] and their femur, when combined with a wolf's heart, a plainstrider's scale and a swoop's gizzard, can be used in a ritual to cure deadly infections.[9]