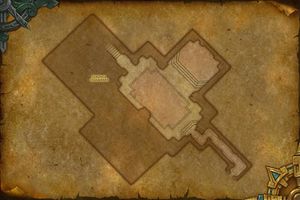 This section contains information that needs to be cleaned up. Reason: There is a *lot* of typos in there, are they made by editors or Blizzard ? If the latter, you should use [sic])
General Jakra'zet

A decorated Sandfury soldier, Jakra'zet joined the coalition of forces under the banner of the Prophet Zul during the Pandaria campaign. Despite the outcome of the campaign, Jakra'zet's skill in strategy and tactics could not be denied.

Eventually, the great Prophet Zul petitioned to promote Jakra'zet to the role of general.

Of the Zanchuli Council, Yazma and Vol'kaal voted with Zul for the appointment. Raal and Loti objected, but they were overruled by King Rastakhan, who was curious at what Jakra'zet could accomplish.

And thus, Jakra'zet became the first of the Sandfury Tribe to hold the rank of General of the Zandalari army.

May he bring victory for Zandalar.

Raal's appointment to the Zanchuli Council was no surprise to anyone. The charming hexlord of Pa'ku had won the heart of his loa and of many of the people.

Seen as the "man of the people," Raal has taken it upon himself to represent many of the people within Zandalar's borders.

Long may his smile adorn the Zanchuli Council.

Among the military of Zandalar are the elite dire trolls. These trolls are warriors who have perfected their arts, traded portions of their lives for the dark gift of brutal strength, and serve Zandalar as her greatest weapons of war.

Long ago it was decided that the dire trolls should always have a seat on the Zanchuli Council, to ensure that those specials needs of the elite warriors were met by the government, and to provide the wisdom of war to those councilors who may seldom see a battlefront.

Of these elite, Vol'kaal was chosen for his strength, his power and a strongly worded recommendation from Yazma. This would be the third dire troll appointed by Yazma, for they are short lived, and their minds are easily bent.

May his strength defend Zandalar to the end of his days!

Beloved by the youth of Zandalar, Wardruid Loti earned her place on the Zanchuli Council through the demands of the next generation of warriors and hunters.

Some credit the decision of Gonk to allow the Zandalari the worship of many loa, not just himself. This progressive movement, championed in voice by Loti, aided in the resurgance[sic] of druidism as a cultural mainstay of Zandalar.

Long may she protect the borders of Zandalar.

High Priestess of the spider loa Shadra, Yazma comes from a long line of priestesses who served the King as the keeper of secrets and spies.

Through Yazma's diligence, King Rastakhan was warned of and survived at least fifteen assassination attempts. It was her spy network that also led to the discovery of the Gurubashi once again practicing blood magics and worshiping the fallen loa: Hakkar.

Leader of the Zanchuli Council and chief advisor to King Rastakhan, Zul has earned his name and title through his many years fortelling[sic] accurate futures, providing the kingdom's military and agriculture with a tremendous advantage.

From a young age, Zul was burdened by prophecies of dark times and the end of the world. Many of these prophecies came to pass, including the coming of the Cataclysm.

While some of the catastrophes were not as grim as Zul predicted, the events did come to pass.

Zul has lived many lives of trolls, preaching and predicting and standing by the side of his friend and king, Rastakhan.

Long may his vision praise Zandalar.