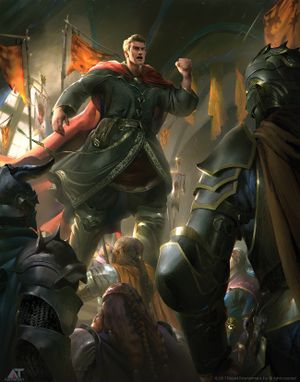 Turalyon rallies the Council of Seven Nations to form the Alliance of Lordaeron.

The Council of Seven Nations[1] was a council consisting of the leaders of the seven human nations, formed by the Regent Lord of Stormwind, Anduin Lothar, and the king of Lordaeron, Terenas Menethil II, after the First War with the intent of convincing the other kingdoms to band together to repel the invading Orcish Horde. The council, which regularly met in Capital City, eventually resulted in the creation of the Alliance of Lordaeron.[1]

The council consisted of the following members:

After Stormwind City's destruction by the Horde at the end of the First War, Sir Anduin Lothar led the city's refugees north. Word of the city's destruction soon spread to other nations, and Terenas Menethil II, King of Lordaeron, was deeply shaken by the news. It had been difficult to sift fact from rumor, and initially, Terenas had not even believed that the orcs were real, but now he knew that they were a grave threat. When Stormwind's survivors finally reached Lordaeron, Lothar told Terenas of the Horde's true might and urged the king to gather the other human nations immediately, for he argued that the Horde would easily be able to pick off each kingdom one by one if they did not unite against their common foe. In time, the leaders of all the human nations gathered in Lordaeron's Capital City. There had not been such a gathering in recent memory, and the occasion was deemed the Council of Seven Nations.[1]

Initially, unity seemed a distant dream. Terenas urged his fellow rulers to band together into an Alliance to eradicate the Horde and reclaim Stormwind. Antonidas, Proudmoore, and Trollbane all showed interest in the idea. Antonidas had heard firsthand accounts of the Horde from Khadgar, while Proudmoore was friends with Lothar and believed that avenging a destroyed human nation was the correct course of action. Trollbane had a close relationship with Lordaeron and was also willing to fight. Gilneas and Alterac were not as easily convinced, however, showing open suspicion about whether or not there had been an invasion by otherworldly creatures at all and believing that there must be some other explanation. The root of this suspicion was the work of the black dragon Deathwing, who had earlier taken on the guise of a human noble and begun to spread rumors in Lordaeron that the tales of orcs were merely fabrications meant to hide growing problems with human rebels, which had seemed far more believable than Stormwind's cries for help.[1] 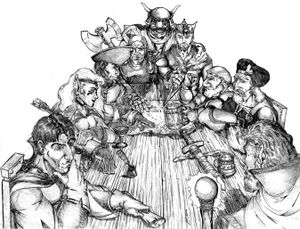 The council as seen in the Warcraft II: Tides of Darkness manual.

As the Council of Seven Nations continued its meetings, the Horde prepared for war. As the orcs marched north, they conquered much of Khaz Modan, laid siege to the dwarven and gnomish cities of Ironforge and Gnomeregan and began to construct a fleet to launch a surprise attack in the heart of humanity's territories. When gnome and dwarf refugees arrived in Lordaeron with news of the conquest, the Council was shocked. The speed with which their territories had fallen defied understanding, and the Horde was now encroaching north. Despite this development, Greymane and Perenolde stubbornly resisted calls for creating an Alliance. They feared that by unifying, they would lose some of their regional power. Divisions widened between the members of the council, and the arguments grew so heated that Gilneas and Alterac threatened to abandon the council entirely.[2]

Turalyon, one of Lordaeron's most venerated priests, could not stand by in attendance as the council members squabbled over meaningless issues. He brought the orphaned prince of Stormwind, Varian Wrynn, to his side and called on the leaders to forget their old differences. If they underestimated the orcs, every kingdom would suffer Stormwind's fate — their cities would burn and their children would become orphans like Varian, if they even survived at all. Turalyon argued that the kingdoms stood at a crossroads. If they failed to unite, history would know them as a people too proud to band together, who'd had a chance to save Azeroth but had thrown it all away over politics and illusions of power. Yet if they did unite, they could change history and arise as Azeroth's guardians, for no other race in the known world had humanity's resources, strength of leadership, or bravery. The Council of Seven Nations erupted in applause after Turalyon's speech, his words even managing to sway Greymane and Perenolde. On the very same day, the human leaders voted unanimously to form the Alliance of Lordaeron. The council decided on Anduin Lothar as the one to lead the Alliance military, since he would be able to act fairly and neutrally due to his Stormwindian background and lack of political ties to the northern nations. Lothar accepted his title with great humility and immediately rallied the Alliance's forces before ordering them to gather in the Hillsbrad Foothills.[2]