The Council of Six, also known as The Six, the High Council[citation needed]  or the Ruling Council,[1] is the name given to the Kirin Tor high council of Dalaran. These six individuals are the leaders of both the city and all territories under the control of Dalaran. The Six are usually the most senior, but not necessarily the most gifted. They are chosen by several means, magic but one of them.[2]

The council meets to discuss important issues and vote on matters — no single member holds sway, and the majority vote decides every issue. In case of a tie, the members reconvene a day later, during which interval each member considers his or her vote and all relevant information.[3] They meet in the Chamber of Air, a room with no visible walls — the gray stone floor with its central diamond symbol stood beneath an open sky that shifted and changed rapidly, as if the time sped past within the chamber.

Traditionally, the membership of the Council of Six was kept a strict secret. When someone met with the Council officially, it was always in a special, enchanted chamber, the Chamber of Air, and the Six would be disguised to keep their identity a secret. Of course, in a city populated by magi, such efforts were not always successful, as Khadgar proved with little effort.[4]

Since the reconstruction of Dalaran following the Third War, the Council has chosen to abandon the secrecy of its members.[5] At some point after the attack on Theramore, Vargoth joined the council. Near the beginning of the Burning Legion's third invasion, Khadgar called for a vote to have the Horde return to Dalaran. Jaina was vehemently opposed, especially after the events of the Broken Shore, but she was outnumbered with only Ansirem Runeweaver voting no alongside her. Jaina left Dalaran in anger and Khadgar became the council's leader.[6] When the council next assembled, Kalecgos was seen as the sixth in Jaina's place.[7] 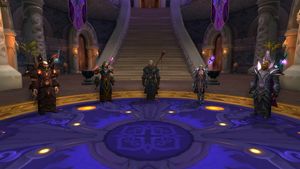 The current Council of Six, sans Kalecgos, in the Violet Citadel.