The Council of Three Hammers is the regency that rules the Kingdom of Ironforge, until Dagran Thaurissan II is fit to lead the nation alone. When Dagran takes control of the kingdom, the Council is to come to an end.[1] As the name suggests, its members are referred to as the Three Hammers.[2]

The Council of Three Hammers is so named because it is composed of a representative from each of the three major dwarven clans: 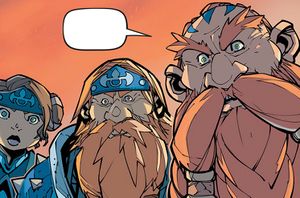 In the wake of King Magni's petrification, Queen-Regent of the Dark Iron Moira Thaurissan returned to Ironforge with her infant son Dagran Thaurissan II to claim the throne. Backed by the Dark Iron clan, she ruled the city arrogantly and with an iron fist. She held all the people of Ironforge hostage, leading to the Alliance's intervention. Despite Moira being a tyrant, she was nonetheless the legitimate heir to the Ironforge throne, and her death would put into question the succession of the throne. This lead to more chaos and conflict. If she lived, through her and her son the three dwarven clans could unite. King Varian Wrynn agreed to spare Moira's life on the grounds that she'd have to earn her people's respect if she is to be a leader and unite the dwarves. To take into account the opinions of all dwarves, Varian called for the formation of the Council of Three Hammers: Queen-Regent Moira of the Dark Iron, High Thane Falstad of the Wildhammer, and Muradin of the Bronzebeard. Despite their varying backgrounds and ideological differences, the three representatives pledged to rule jointly for the good of Ironforge. They are now most likely the heads of the Senate of Ironforge.[3] 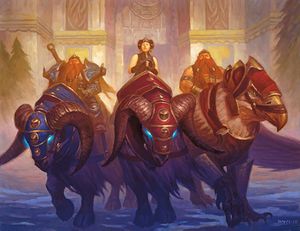 The Council of Three Hammers

Upon returning from Outland, former Thane Kurdran Wildhammer took High Thane Falstad's position on the Council. The other two clans decreed that the Hammer of the High King be reforged; however, it was discovered by Advisor Belgrum that the parchment was faked and that the three so-called pieces of the hammer could have come after the civil war. Worse yet, the head and crystal fragments were also fakes. In spite of this, the majority of the Council agreed to continue, keeping the hammer pieces' validity from the public.

Kurdran disagreed with that action, and he quietly removed the Wildhammer scepter that was to be used as the hammer's handle. He confronted Moira, who implied that she planned the Wildhammer dwarves alienating the other two clans, so she could strengthen relations between the Dark Iron and the Bronzebeards. On the day of the reforging, the scepter was discovered missing, Kurdran admitting to stealing it. Instead of letting the lie continue, he shattered the scepter into pieces with his Stormhammer. Kurdran declared that the union of the dwarven clans shouldn't start with reforging a hammer that could be fractured again. He proposed that the dwarven clans move forward from the past and unite with a fresh start. Muradin gladly joined him, and Moira resented that she had no choice but to publicly help in fracturing their fragments.

Kurdran chose to leave the council, recognizing Falstad as the better dwarf to represent the Wildhammer clan.[4]

After Dark Iron dwarves' attack on the Ironforge Airfield, relations tensed among the Council members, with Falstad and Muradin calling out Moira for being unable to control her own people. Moira revealed that some of her people are still firmly in the grips of the Twilight's Hammer, and she quickly recognized that the only person who could coordinate such an attack was Ambassador Slaghammer. Slaghammer was promptly arrested for treason.[5]

During this time the council met Li Li Stormstout, who was visiting the city to speak to King Magni. Li Li demonstrated sarcastically incredible respect for the Council, saying "You have proven to be no less than the proverbial hard place to King Magni's literal rock, and I do feel so honored to find myself in between the two." Moira's response was drowned out by Kurdran's laughter, and Li Li left before Muradin called his fellow council members to order.[6]

When Theramore was in danger of being invaded by the Horde, Jaina Proudmoore asked the Council for warriors and perhaps gryphons to help defend the city.[7] The Council sent General Stoutblow and General Redmane (from the Wildhammer and Bronzebeard clans respectively) in command of their dwarven warriors to help in the defense effort.[8] 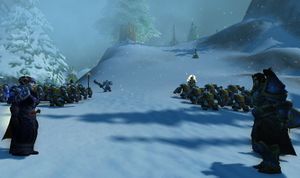 One day, King Varian's scouts had discovered that Zandalari trolls threatened the dwarven capital by rallying the Frostmane trolls against them. The King believed that if he aided the dwarves against the trolls that they would allow him more troops for his campaign against the Horde. He did not realize how little the dwarven clans trusted each other. As he beseeched the Council of Three Hammers to proactively take the fight to the Frostmane, both Muradin and Falstad declined for fear of Moira taking advantage of their warriors' absence from the city. The King argued that Ironforge would fall under siege if no one helps. Moira Thaurissan offered aid to prove her clan's loyalty to Ironforge and to the Alliance. And so Moira and King Varian set out in the snow to save the city, leaving the other leaders to think about their actions.

Queen Moira with her Dark Iron dwarves and King Varian with his party of Alliance champions worked together to attack the Frostmane on Shimmer Ridge. Upon their return, the other dwarven leaders were ashamed of their behavior and vowed never again to allow such fear and distrust to cloud their judgment. With newfound trust for each other, the Council pledged the full strength of Ironforge to the Alliance cause.[9][10]

The Trial of Garrosh Hellscream

The Council of Three Hammers was among the audience during the trial of Garrosh Hellscream. Their creation is shown during one of the visions of the trial.[11]

The Council of Three Hammers sent Fenella Darkvire, Carrick Irongrin, and Fendrig Redbeard to aid in the reconstruction of the Jade Serpent statue. The operation itself was left in Moira's hand, signaling the greater deal of trust her fellow council members receive her with.[12]

When Magni Bronzebeard awakened, dwarves of all clans in Ironforge were in uproar as they were unsure what will happen with the new government. Moira was adamant in ensuring every clan would remain in the city. Magni thankfully had no intention to rule, as he had to prepare the world for the third invasion of the Burning Legion.[13]

Now the main ruling body of the dwarves, the Council of Three Hammers serve as the faction leaders for Ironforge. The battle with Muradin, Moira and Falstad is somewhat comparable to the battle with Lor'themar Theron, Grand Magister Rommath and Halduron Brightwing in Silvermoon City, in terms of the triple boss fight mechanics. Two tanks are recommended, one to hold Muradin and one to hold Moira and Falstad. All three should be tanked within their throne room.

The two major threats to the raid are Muradin, who boasts the highest amount of health of the three, and whether or not there is relatively high player traffic in Ironforge. Without player interference, the quickest strategy is to first focus on Moira. She will use priest abilities, though their potency can be easily ignored if she is given the raid's full attention. Once she is down, the raid should focus on Falstad. Falstad will make use of various Wildhammer shaman abilities and hits far harder than Moira. Without Moira's healing he should go down fairly quickly.

Finally, Muradin should be dealt with. Like Magni before him, Muradin has both the Avatar and AoE pushback abilities, in addition to a storm bolt. With the other two dead and with low enemy player input, Muradin will follow suit and the raid will have done its job.