For other uses, see Tirisfal (disambiguation). 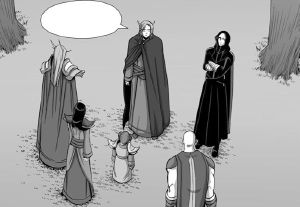 The Council of Tirisfal at the time of the creation of the Guardian.

The Council of Tirisfal (the Order of Tirisfal,[1] Order,[2] or Tirisfalen) was the secret council of human, gnome, and high elven mages charged with the selection and disposition of the Guardian of Tirisfal. It's described as an order of sorcerers.[3]

The Order was formed by the most powerful of the high elves in order to prevent and safeguard Azeroth from the demons, something that their Highborne ancestors couldn't do. They derived their name from their meeting place in the Tirisfal Glades;[4][5] specifically, they met in Venomweb Vale.[6] They also used the Hall of the Guardian as a base.[7] 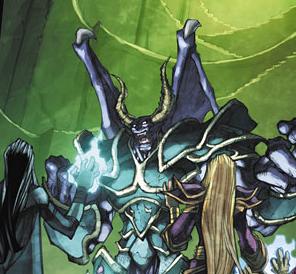 Over 3,000 years ago[8] an elven society called the Council of Silvermoon, that had long ago sworn to forestall any full return by the Legion, met with the most powerful wizards of Magocrat lords of Dalaran and formed the Council of Tirisfal, whose quest was to hunt those demons who had already arrived, and prevent others from entering Azeroth.[9] For a great period of time, the Order's oldest members were three high elves, among them Relfthra. They were in a position of authority even during the guardianship of Scavell, and up until the purge of the Tirisfalen.

When there was an absence of the Guardian, the Council called upon the Tirisgarde - the elite mage-guard of Dalaran.[10] The Tirisgarde was first created to hunt down Aegwynn when she went rogue[11] because she grew suspicious of the order and believed that the council was abusing its power by manipulating the politics of the human kingdoms. Tarthen stole the greatstaff

[Ebonchill] and went to find Aegwynn who bested him and encased him in a layer of diamond-hard ice. Despite the hot weather in Stranglethorn Vale, Tarthen was still frozen solid when the Council members found him. It took considerable effort to thaw his corpse and free Ebonchill from his lifeless hand. The magi then returned the staff to its owner[12]

The two most famous Guardians of Tirisfal by far were the last two ones — Aegwynn and her son Medivh. Medivh possessed by Sargeras killed many named and unnamed members of the Order throughout Azeroth during the time of the First War before he was slain. It is, however, known that Aegwynn revived an uncorrupted Medivh, so theoretically he still lives. While it may be possible for Medivh to pass the mantle of Guardian to another, it was he who destroyed the Order with the specific purpose of breaking the chain, the one thing he and Sargeras agreed upon. His final known speech echoes this sentiment, as he wished to teach the world that it no longer needed Guardians.

The New Council of Tirisfal

In view of the growing threat of Cho'gall and his masters, it was decided by Aegwynn, Jaina Proudmoore, and Meryl Felstorm to reform the Council of Tirisfal. The three also planned to recruit Maraad, Broll Bearmantle, Thrall and Khadgar for the new order, but Thrall and Khadgar were unavailable. The reformed Council did battle with Cho'gall at Ahn'Qiraj, with Med'an as their Guardian.[13] Unfortunately, the new Council didn't prove to be as binding as the original, and most of its members went their separate ways after Cho'gall's defeat. As for Med'an, he returned the Guardian power to the Council.[14][15] The Council has yet to choose a new Guardian.[16]

After Kathra'natir escapes from his body, Meryl, the ghost of Alodi, and a mage adventurer procure the Forge of the Guardian from the Violet Hold. Within the Hall of the Guardian, Meryl declares the Council's Tirisgarde reformed, with magi from across Azeroth coming in to boost its numbers. As Meryl declares, the Tirisgarde's largest concern at the moment is the hunting of Kathra'natir, as his time spent within Meryl provided him with knowledge of the Council's secrets.

[Ebonchill], Alodi's staff. The visions mistook them for Alodi himself (or simply replayed events from history with the Conjuror playing the part of the old Guardian), and helped to empower the staff, albeit somewhat reluctantly.